In between Saturday errands went by the Episcopal Cathedral down town to see the progress and the priests were putting finishing touches on the mandala. The choir was practicing, it was a great mix of culture and tradition. see my post from Friday evening for the full story. 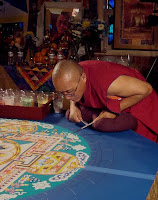 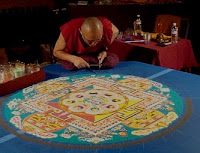 Posted by oreydc at 3:30 PM No comments: Links to this post

Cosby's 'Come On People' calls on the poor, middle-class to help solve problems
Posted by oreydc at 10:15 AM No comments: Links to this post

Keith Olbermann on MSNBC Countdown comments about the president's "cataclysmic deception about Iran."
Posted by oreydc at 9:39 AM No comments: Links to this post

A World Contained in Grains of Sand 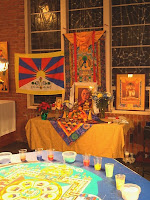 my pics
A world contained in grains of sand
By Niesha Lofing - nlofing@sacbee.com

The sights and sounds within Trinity Episcopal Cathedral on Thursday morning were anything but typical.
While evergreen wreaths adorned the pulpit and garlands decorated pillars, it wasn't the sound of hymns or Christmas carols that filled the Episcopal church.
Instead, the melodic voices of two Tibetan monks chanting and praying rang through the cathedral. The smell of sweet incense filled the air.

And in an alcove near an empty manger awaiting its Nativity figurines stood a table with a blueprintlike outline of what would become a Medicine Buddha sand mandala decorating its surface.
The juxtaposition of Eastern and Western religion was intentional, an effort to exemplify the need for peace and understanding among groups.
"When there's so much division happening in the world, especially with religion, it's important to practice hospitality," said Brian Baker, dean of Trinity Cathedral.
The church, with the Dalai Lama Foundation's Sacramento chapter and other groups, is hosting four days of events centered on the creation of a sand mandala, a traditional Tibetan Buddhist artwork composed of millions of grains of dyed sand.
The mandala under way at Trinity represents the residence of the healing Medicine Buddha. After the monks complete the mandala – expected to take about 50 hours – it will be dismantled Sunday during a 1 p.m. ceremony. The mixed sand will be given out to the audience and released into the Sacramento River.
The event is the first of many that will precede the Dalai Lama's visit to Sacramento, scheduled for 2009.
Baker said he hopes his parishioners will be inspired by the Buddhist traditions to reflect on their spirituality and open their hearts and minds to different points of view.

"There's nothing wrong with making space in your life for other perspectives," he said.
About the writer:
Call The Bee's Niesha Lofing, .
Unique content, exceptional value. SUBSCRIBE NOW!

Posted by oreydc at 7:58 PM No comments: Links to this post

Did I tell you about my January plans with HELPS International? I am going to be working with some cool folks in a village about an hour north of my favorite village (Nebaj, Quiche) as part of a project to help a school. If you feel like donating or supporting the project, or just learning more about it see: http://www.helpsintl.org/programs/education.php

Posted by oreydc at 10:14 PM No comments: Links to this post

Two of my former math students - Dominic and Donte Morris - have an amazing baseball project.

I am beyond proud of these guys.

Check it out: http://www.morrisleague.com/
Posted by oreydc at 6:15 PM No comments: Links to this post

This is a Ribbon Chert

My buddy Tim Horner a Geology Professor here at Calfironia State University, Sacramento states re: my photo of rocks
This is a ribbon chert. It forms in the deep ocean, often in upwelling zones. Plankton feed on the nutrients in an upwelling zone, and when they die their silica-rich shells are so common a cherty (silica-rich) layer forms. It is probably Cretaceous in age (more than 65 million This is good stuff. I didn't know that there was such a good exposure in S.F. There are similar outcrops in Point Reyes and near Bodega Bay.

I am playing a bit with my photo from Point Bonita (Golden Gate) this morning...
I am inspired by the work of Hiroshi Sugimoto's Seascapes that I saw at the D'Young a few months back...

Posted by oreydc at 11:28 PM No comments: Links to this post

Mukunda goes to the City

Me and my Hybrid

The Castro from a far... 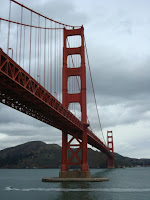 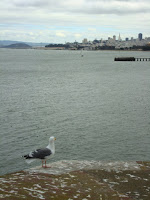 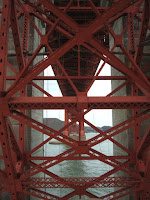 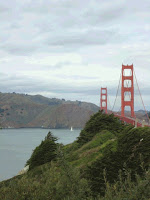 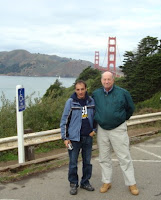 I invited my friend Braum to go with me to show Mukunda (our guest from Nepal) the sites in San Francisco... it was Mukunda's first time to see the ocean...

Posted by oreydc at 7:19 PM No comments: Links to this post