Peter G. Gosselin, of The Los Angeles Times: "The skies over the economy have ominously darkened in recent days. The chief reason is oil. And there are signs the nation may have reached an economic tipping point after years of shrugging off the petroleum problem."

Posted by oreydc at 9:43 AM No comments: Links to this post

This guy is so disturbing and false... why do folks listen to him?
Posted by oreydc at 12:56 PM No comments: Links to this post

Here is what MoveOn says:

There's a long and disgusting history of people blaming the Jews for their own persecution. The latest to do so is one of John McCain's key backers—Pastor John Hagee.
McCain actively sought Hagee's backing and says he's "very honored"1 and "very proud"2 to have it. But yesterday, a recording surfaced of Hagee "explaining" that God sent Hitler to perpetrate the Holocaust because Jews weren't moving to Israel.
It's hard to overstate how deeply offensive these views are. And how disturbing it is when John McCain aligns himself with extreme religious right leaders like Hagee, while ducking responsibility for their hateful views.
J Street, a new progressive Jewish group, is asking John McCain to renounce Hagee and send a clear message that it's absolutely intolerable to blame Jews for the Holocaust. You can sign on to their petition here:
http://www.moveon.org/r?r=3689&id=12704-538505-VXhFZO&t=1
MoveOn members have already confronted McCain over Hagee's comments on Hurricane Katrina, but he refused to reject Hagee's support. We need to turn up the heat. Please help us send a message that hate has no place in American politics.
Thank you,
–Eli, Michael, Peter, Adam, and the MoveOn.org Political Action Team

P.S. As J Street points out, it's not just Hagee's views toward Jews that are outrageous. From their alert: "This is the same John Hagee whose support John McCain is 'glad' to have despite 'condemning' some of his views.3 And it's the same John Hagee who has so far had to apologize for calling the Catholic Church a 'great whore' 4 and who said Hurricane Katrina was the judgment of God against New Orleans for planning a gay pride parade.5"
And if you want to see Hagee's actual comments, here they are, as reported today by the Huffington Post:6
Going in and out of biblical verse, Hagee preached: "'And they the hunters should hunt them,' that will be the Jews. 'From every mountain and from every hill and from out of the holes of the rocks.' If that doesn't describe what Hitler did in the holocaust you can't see that."
He goes on: "Theodore Hertzel is the father of Zionism. He was a Jew who at the turn of the 19th century said, this land is our land, God wants us to live there. So he went to the Jews of Europe and said 'I want you to come and join me in the land of Israel.' So few went that Hertzel went into depression. Those who came founded Israel; those who did not went through the hell of the holocaust.
"Then god sent a hunter. A hunter is someone with a gun and he forces you. Hitler was a hunter. And the Bible says—Jeremiah writing—'They shall hunt them from every mountain and from every hill and from the holes of the rocks,' meaning there's no place to hide. And that might be offensive to some people but don't let your heart be offended. I didn't write it, Jeremiah wrote it. It was the truth and it is the truth. How did it happen? Because God allowed it to happen. Why did it happen? Because God said my top priority for the Jewish people is to get them to come back to the land of Israel."

see: 10 things you need to know about John McCain

Posted by oreydc at 12:26 PM No comments: Links to this post

Rush Limbaugh is the BuzzFlash GOP Media Putz of the Week.

Rush Limbaugh is the BuzzFlash GOP Media Putz of the Week. Fresh off his high of being the generalissimo of coordinating "Operation Chaos," which succeeded in getting an unknown number of Republicans to vote for Hillary Clinton in the primaries, Rush Limbaugh is on a high, even as his own party of the wealthy heads for a crash landing in the gutter.

Posted by oreydc at 8:25 AM No comments: Links to this post

"How do we engineer the sweeping social and political and industrial change that we need in a short period of time, from top to bottom?" 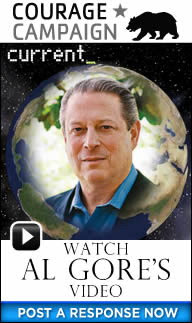 Posted by oreydc at 5:02 PM No comments: Links to this post

NEW YORK, 21 May 2008 (BWNS) -- Allegations by Iran that six Baha'is were arrested last week for security reasons and not for their faith" are utterly baseless and without documentation, said the Baha'i International Community today.All of the allegations issued in a statement on Tuesday by the Iranian government are utterly baseless," said Bani Dugal, the principal representative of the Baha'i International Community to the United Nations, referring to statements made in a press conference given yesterday in Tehran by Iranian government spokesman Gholam-Hossein Elham, at which he acknowledged the arrest and imprisonment of six Baha'i leaders last week.The allegations are not new, and the Iranian government knows well that they are untrue," Ms. Dugal said. The documented plan of the Iranian government has always been to destroy the Baha'i community, and these latest arrests represent an intensification of this plan.The group of Baha'is arrested last week, like the thousands of Baha'is who since 1979 have been killed, imprisoned, or otherwise oppressed, are being persecuted solely because of their religious beliefs. The best proof of this is the fact that, time and again, Baha'is have been offered their freedom if they recant their Baha'i beliefs and convert to Islam, an option few have taken.Far from being a threat to state security, the Baha'i community of Iran has great love for their country and they are deeply committed to its development. This is evidenced, for example, by the fact that the vast majority of Baha'is have remained in Iran despite intense persecution, the fact that students denied access to education in Iran and forced to study abroad have returned to assist in the development of their country, and the recent effort by Baha'is in Shiraz to provide schooling for underprivileged children - an effort the government responded to by arresting some 54 Baha'i participants in May 2006," said Ms. Dugal.In its coverage of Mr. Elham's press conference, the Islamic Republic News Agency (IRNA) reported that the six Baha'is were arrested for security reasons not for their faith." The IRNA report also quoted Mr. Elham as saying that the six Baha'is were somehow linked to foreigners, the Zionists in particular."Ms. Dugal addressed that issue also, saying:The charges linking the Baha'is to Zionism are a distortion of history: The Baha'i Faith has its world headquarters in Israel because Baha'u'llah was, in the mid-1800s, sent as a prisoner to the Holy Land by two Islamic countries: Ottoman Turkey and Iran.The charge that Baha'is are Zionists, which has in fact been made against Baha'is for the last 30 years by Iran, is nothing more than an effort by the government to stir animosity against Baha'is among the Iranian population at large. This is but the most recent iteration in a long history of attempts to foment hatred by casting the Baha'is as agents of foreign powers, whether of Russia, the United Kingdom, or the United Statesand now Israelall of which are completely baseless.The real issue, as it relates to Baha'is, who are committed to nonpartisanship and nonviolence, is the ideology of the government, which has undertaken a well-documented effort to utterly block the development of the Baha'i community not only through arrests, harassment and imprisonment but also by depriving their youth of education and preventing adults from obtaining a livelihood.We would ask whether issues of state security rather than ideology were involved in recent incidents such as the destruction of a Baha'i cemetery and the use of a bulldozer to crush the bones of a Baha'i who was interred there; the harassment of hundreds of Baha'i schoolchildren throughout Iran by teachers and school officials in an effort to make them reject their own religion; or the publication of dozens of defamatory anti-Baha'i articles in Kayhan and other government-sponsored news media in recent months," said Ms. Dugal.She also noted that over the years, a number of government officials, clerics, and members of the judiciary have in fact made statements in private noting the nonpartisan conduct of the Baha'i community and the unjustified nature of government charges against Baha'is.She added that the present governments ideology is based in large part on a belief that there could be no Prophet following Muhammad. The Baha'i Faith poses a theological challenge to this belief.Freedom of religion is the issue and Iran itself is a signatory to international covenants that acknowledge the right of individuals to freedom of religion or belief, including the right to change ones religion," Ms. Dugal said.What the Iranian government cannot tolerate is that the Iranian people are less responsive to the governments propaganda, because they see the reality  that Iranian Baha'is love their country, are sincere in their desire to contribute to its well-being, are peace-loving, and are law-abiding  and that these qualities stem from their beliefs. Consequently, there is growing sympathy for the Baha'is. Increasingly, people at all levels of the society are coming to their defense both privately and publicly, and there is growing interest in and attraction to the Baha'i Faith amongst the population," Ms. Dugal said.

To view the photos and additional features click here: http://news.bahai.org

Posted by oreydc at 3:50 PM No comments: Links to this post

Large crowds for Barack Obama show increased passion in presidential politics
Posted by oreydc at 4:05 PM No comments: Links to this post

Let's reduce the misunderstanding between Appalachia and the rest of the U.S.
Posted by oreydc at 4:04 PM No comments: Links to this post

Democracy in America Is a Series of Narrow Escapes, and We May Be Running Out of Luck By Bill Moyers CommonDreams.org
Posted by oreydc at 9:01 AM No comments: Links to this post

A Crowd in Portland 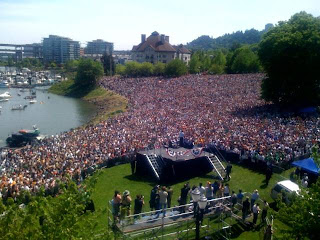 Posted by oreydc at 8:59 AM No comments: Links to this post