Make the jump here to listen to the piece

Posted by oreydc at 4:04 PM No comments: Links to this post

Never give up! Never surrender! 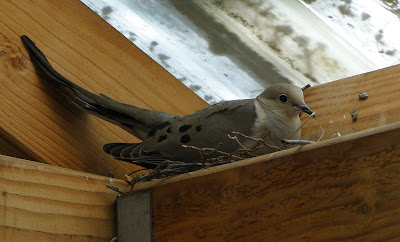 After hatching and raising a pair of chicks, that were brutally murdered by an evil Blue Jay, and surviving attacks at the water feature by a cat... the Jay comes and raids the eggs, yet the dove couple is back at it. Amazing...

I like their fortitude, strength, and not giving into terrorism... there is a lesson here on my back porch. Never give up! Never surrender!

Good luck with round two!
Posted by oreydc at 11:43 AM No comments: Links to this post 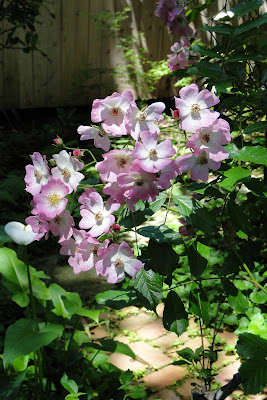 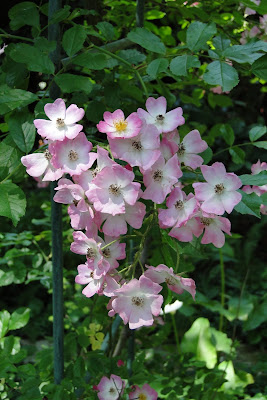 and a little rose action... 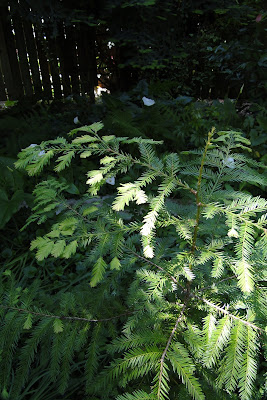 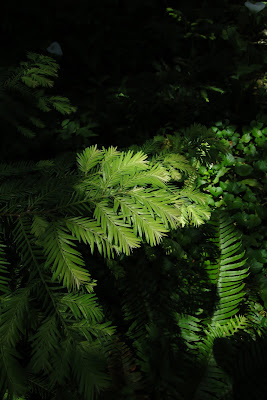 One of the best things about spring in California is the shade of green on the redwoods...
Posted by oreydc at 11:24 AM No comments: Links to this post

Can We, as Guardians of the Earth, Reclaim Our Planet from Toxic Corporations Such as Texaco-Cheveron? See How They Raped the Amazon and Caused Death, Cancer and Destruction.

Sale: "Crude" DVD: The Toxic Rape of the Amazon by Texaco-Chevron. A Must Watch if You Want to Reclaim Earth from Its Corporate Destroyers.

"Three years in the making, this riveting documentary from acclaimed filmmaker Joe Berlinger (Brother's Keeper, Paradise Lost, Metallica: Some Kind of Monster) is the epic story of one of the largest and most controversial legal cases on the planet. An inside look at the infamous $27 billion "Amazon Chernobyl" case, Crude is a real-life high stakes legal drama set against a backdrop of the environmental movement, global politics, celebrity activism, human rights advocacy, the media, multinational corporate power, and rapidly-disappearing indigenous cultures. Presenting a complex situation from multiple viewpoints, the film subverts the conventions of advocacy filmmaking as it examines a complicated situation from all angles while bringing an important story of environmental peril and human suffering into focus.

Our Senior BuzzFlash journalist Meg White began her 12/7/09 article about the documentary "Crude":

"In the award-winning documentary Crude, the rainbow plumes of oil spreading into pristine streams are unmistakable. The fiery landscapes might remind you of sabotaged Kuwaiti oil fields, but the surrounding forest tells you you're looking at the Amazon. And still, the driver of the truck spreading oil waste on dirt roads as if it were salt on an icy sidewalk remains faceless.

.... there's never a moment when you're unsure of the identity of the victims.

The film opens with an indigenous woman saying in her language, "Since the company arrived, we are ashamed to wear our traditional clothing. Most of our women no longer sing, but I will sing for you."

Crude tells the story of a lawsuit filed by 30,000 Ecuadorians against Texaco in 1993. The plaintiffs include members of the indigenous communities of Secoya, Siona, Cofán, Huaorani, Quichua, as well as colonial settlers. Chevron inherited the burden in 2001 after a merger with Texaco. The outcome of the trial is still up in the air.

What is certain is that people are suffering."

"Absolutely the most powerful, emotion- provoking, heart-wrenching documentary I have ever seen." --John Perkins, Author, Confessions of an Economic Hit Man

“ A powerhouse! This one means to shake you. And in Berlinger’s hands, it does.” - ROLLING STONE

“Gripping! Berlinger is a master of true-crime vérité.” - VILLAGE VOICE

“A gripping account of corporate malfeasance.” - TIME OUT LONDON

Posted by oreydc at 10:31 AM No comments: Links to this post

Obama: GOP Drove The Country Into A Ditch. 'Now They Want The Keys Back'

Posted by oreydc at 2:16 PM No comments: Links to this post

Via JMG: British Petroleum: It's Really Just A TINY Spill, Compared To The Entire Ocean

The CEO of British Petroleum would like us all to keep in mind that the Gulf oil spill is tiny, a pittance really, compared to the volume of the ocean. SRSLY.

Tony Hayward, the beleaguered chief executive of BP, has claimed its oil spill in the Gulf of Mexico is "relatively tiny" compared with the "very big ocean". In an bullish interview with the Guardian at BP's crisis centre in Houston, Hayward insisted that the leaked oil and the estimated 400,000 gallons of dispersant that BP has pumped into the sea to try to tackle the slick should be put in context. "The Gulf of Mexico is a very big ocean. The amount of volume of oil and dispersant we are putting into it is tiny in relation to the total water volume," he said. US authorities estimate that about 5,000 barrels of oil a day are leaking from the damaged pipeline lying on the seabed after attempts to stem the flow failed.

The president has been uncharacteristically blistering in his criticism of BP and Halliburton, saying he was repulsed by their "falling all over each other" to blame other parties.

a repost from Joe
Posted by oreydc at 2:13 PM No comments: Links to this post

GOVERNOR KEEPS $305 MILLION RESTORATION OF CSU FUNDING IN MAY REVISE

Today Gov. Schwarzenegger made public his revised plan for the 2010/11 state budget. This revision would retain the governor’s January plan to restore $305 million in state funding to the CSU.

The budget also provides $60.6 million for 2.5 percent enrollment growth. This funding is contingent upon the state receiving a threshold amount in federal aid for other state programs.

In addition, the governor's May budget revision proposal includes the restoration of new competitive CalGrant awards.

The governor had indicated previously that he will not sign a budget that does not include some restoration of the funding that was cut in prior years to the state’s public higher education system.

See his revised budget plan for the CSU at:

Upon hearing about the most recent twist in the state budget saga, CFA reacted with optimism:

“CSU faculty and students appreciate that the governor heard our message that California’s system of public higher education is a vital resource and that we must reinvest in it,” said CFA President Lillian Taiz, a professor of history at CSU Los Angeles.

“Our organization is ready to work with the Schwarzenegger administration to ensure that California's public higher education system continues to be the engine of the state's economic growth.

“Hundreds of thousands of students rely on the CSU for educational, professional and economic advancement. Deep budget cuts to public higher education in past years have put the state’s progress in jeopardy.

“A re-investment in public higher education during these enormously difficult economic conditions is a signal to California that ‘The CSU is the Solution’ is not merely a slogan but a path out of economic difficulties.

“We are hopeful that the members of the Legislature will support this step in the right direction by reinvesting in public higher education.”

THE REST OF THE BUDGET

While the proposed funding for the CSU is greatly improved compared to recent years, there is a great deal of pain for Californians in the Governor’s plan. His non-CSU proposals include:

- Massive cuts to health and human services, including cuts in Medi-Cal services, wages for In-Home Supportive Services workers and new restrictions on eligibility for CalWorks, the state welfare program

- Changes to the pension plans of newly hired state workers

CFA President Taiz said of these planned cuts, “Many of our state’s children, poor, elderly, and disabled will suffer from his plan to cut health and other social services. Healthy children learn better. Health, the public safety net and education are intertwined and cutting any of them is an injury to our shared future.”

Now that the Governor’s budget revision has been unveiled, the focus of CFA’s advocacy efforts on behalf of the CSU will shift to members of the state legislature.

Much can happen in the state budget process between now and the day when the legislature and the Governor adopt the final budget.

State lawmakers will devote the coming months to budget hearings. At some point the state Assembly and Senate each will vote on budget bills. Then “conference committees” will attempt to reconcile the two houses’ and governor’s budget plans.

“Now the supporters of the CSU must ramp up our efforts to make sure this vital funding for the CSU remains in the budget that is ultimately adopted. We must take our message to the state Legislature,” said CFA President Taiz.

“Faculty, staff, students and other supporters of public higher education must continue our advocacy throughout the summer for the sake of our students and California’s future.”

Posted by oreydc at 2:11 PM No comments: Links to this post

Via Jerry Becker From Dailly Kos

How to Destroy the United States

make the jump here to read the full article

Posted by oreydc at 1:23 PM No comments: Links to this post

Posted by oreydc at 4:21 PM No comments: Links to this post

Via JMG: Sarah Palin: Them Are Fightin' Words

Sarah Palin doesn't like it that an Illinois girls basketball team won't be playing in an Arizona tournament due to the state's racist immigration law. Cover your ears, Palin's voice hits some frequencies only heard by bats.

reposted from JMG
Posted by oreydc at 4:06 PM No comments: Links to this post

Posted by oreydc at 3:56 PM No comments: Links to this post

Posted by oreydc at 3:54 PM No comments: Links to this post

Posted by oreydc at 10:57 AM No comments: Links to this post

On next week's all-black cover of Rolling Stone magazine, the editors move to grab your attention with a bold-faced, bright orange exclamation — "You idiots!" So begins a massive editorial in which the writers at Rolling Stone point out the 17 people they believe are the world's biggest "climate killers," and mull over the possibility that the war on climate has already been lost. Here are a few of the most controversial picks.

make the jump here to read the article in full

Posted by oreydc at 10:03 PM No comments: Links to this post

Technology is behaving oddly today. I went to the gym first thing, and the electronic door fob thingy didn’t’ work, so I tried to call the number and my cell phone was nutty, so I went home and reset it, then after working a bit on my laptop it suddenly decided to do that annoying thing that it does when you want to shut down, and began loading new files from MS. On the way to work, my car suddenly does some strange stuff… it felt electronic.

During a presentation during a board meeting, the projector did a funny hiccup. I became concerned.

I went to the doctor, for my bi-weekly acupuncture treatment for allergies, and with a bit of quite meditation, I was thinking things were ok, they were until I got home and Milton said that the cable wasn’t working. So I disconnected it from the power source, and things were fine.

Then the link I sent my father for a laugh was returned with a message from him saying he couldn’t open it, it did for me.

When I then out of the blue the sprinklers came on. They are scheduled to go off at 430am… but they came on at 8pm, the clock is correct and the schedule is fine.

I thought it best to text my son with my concern. He works in a metaphysical bookstore in Venice, CA, and being an agnostic leaning atheist, would be able to give me unbiased advice… he told me his psychic told him it was because Mercury is retrograde...

Posted by oreydc at 9:21 PM No comments: Links to this post