Posted by oreydc at 3:53 PM No comments:

You’ve probably seen the ongoing hoopla surrounding Rand Paul, a self proclaimed Republican Libertarian who suggested the Civil Rights act of 1964 went too far when it required an end to discrimination in private businesses. I guess his dogmatic libertarian principles are offended whenever the Government intrudes, even for so basic and accepted an idea as forbidding racial discrimination at lunch counters, hotels etc. So he’s extreme. But now John Stossel, a reporter in the mold of Geraldo Rivera has taken this idea up on Fox News and is calling for the repeal of the Civil Rights Act. Here is a quote:

"It's time now to repeal that part of the law because private businesses ought to get to discriminate. And I won't ever go to a place that's racist and I will tell everybody else not to and I'll speak against them. But it should be their right to be racist."

Yes, lets go back to “all white” hotels and restaurants. I am just appalled by this entire concept and it is foolish to allow it to grow. Here is a website where you can sign a letter to Fox and get Stossel fired before he creates a following. This is something that needs to get nipped in the bud. Dan

Posted by oreydc at 3:02 PM No comments:

Arianna Huffington: What Soldiers at War Can Teach Us About Surviving Financial Warfare

Arianna Huffington: After spending months embedded with a platoon in Afghanistan, author Sebastian Junger says that he was struck by how, after being put through "the worst experience possible," soldiers often miss it upon returning home. It's not because they are adrenaline junkies, he says. They are addicted to the brotherly love. "Every guy in that platoon was necessary to everyone else and that necessariness, I think, is actually way more addictive than adrenaline is," he says. "You have an unshakable meaning in a small group that you can't duplicate in a society." I believe we can duplicate both that "unshakable meaning" and "necessariness" here at home. Indeed, we must if we are going to survive on the financial battlefield where millions of Americans find themselves.

Posted by oreydc at 3:54 PM No comments:

A Grand Day Out... Old Sacramento 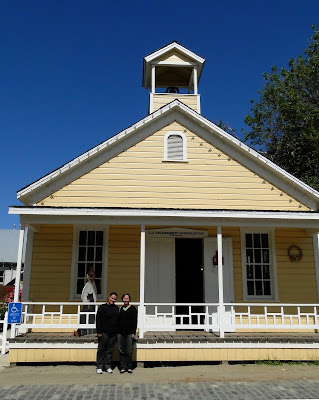 Barbara and Regina at the Old Schoolhouse 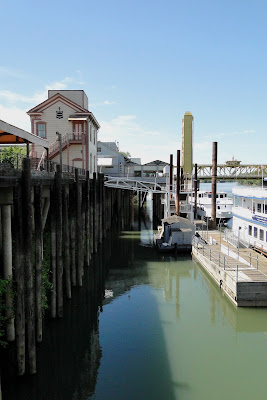 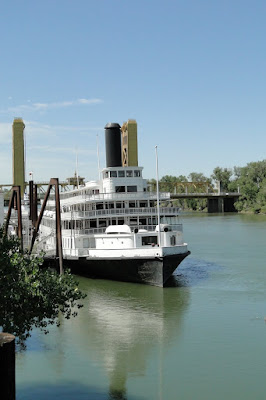 Posted by oreydc at 1:59 PM No comments:

Posted by oreydc at 1:18 PM No comments:

Grandma is eighty-eight years old and still drives her own car.

The other day I went up to our local Christian book store and saw a 'Honk if you love Jesus' bumper sticker ..

I was feeling particularly sassy that day because I had just come from a thrilling choir performance, followed by a thunderous prayer meeting..

So, I bought the sticker and put it on my bumper.

Boy, am I glad I did; what an uplifting experience that followed.

I was stopped at a red light at a busy intersection, just lost in thought about the Lord and how good he is, and I didn't notice that the light had changed.

It is a good thing someone else loves Jesus because if he hadn't honked, I'd never have noticed.

I found that lots of people love Jesus!

While I was sitting there, the guy behind started honking like crazy, and then he leaned out of his window and screamed, 'For the love of God!'

What an exuberant cheerleader he was for Jesus!

I just leaned out my window and started waving and smiling at all those loving people.

I even honked my horn a few times to share in the love!

There must have been a man from Florida back there because I heard him yelling something about a sunny beach..

I saw another guy waving in a funny way with only his middle finger stuck up in the air.

I asked my young teenage grandson in the back seat what that meant.

He said it was probably a Hawaiian good luck sign or something.

Well, I have never met anyone from Hawaii , so I leaned out the window and gave him the good luck sign right back.

My grandson burst out laughing.

Why even he was enjoying this religious experience!!

A couple of the people were so caught up in the joy of the moment that they got out of their cars and started walking towards me.

I bet they wanted to pray or ask what church I attended, but this is when I noticed the light had changed.

So, grinning, I waved at all my brothers and sisters, and drove on through the intersection.

I noticed that I was the only car that got through the intersection before the light changed again and felt kind of sad that I had to leave them after all the love we had shared.

So I slowed the car down, leaned out the window and gave them all the Hawaiian good luck sign one last time as I drove away. Praise the Lord for such wonderful folks!!

Love, Grandma
Posted by oreydc at 1:08 PM No comments:

WANTED: An Apollo Program for Math

WANTED: An Apollo Program for Math


The US ranks much worse than most of our economic competitors in the mathematics performance of high school students.


We now have the knowledge to turn that around. We could raise the level of mathematics performance across the board, within a single school generation, so that we are number one in the world. All it would take is a one-time, national investment of $100 million over a five-year period. That's what it would cost to build and put in place a system that could achieve that change, with the existing school system and the existing teachers. Once built, that system would be self-sustaining.


That sounds like a lot of money for an upfront investment. But thought of as a national initiative, it's peanuts. The payoff for the nation's health and future prosperity is far greater than the long term benefits we got from the far greater investment in NASA's Apollo Program to put a man on the Moon.


I don't think it's going to happen in this way, but not because people don't think it's a good idea. Rather, it would probably require a combination of nonprofit and for-profit funding that our system does not allow.


The same goal can, and surely will, be attained. But it will take a lot longer.


I'll tell you, briefly, what the approach is, how I am so sure it will work, and where I got that cost figure. Everything I say is based on work that has already been done.


I'm a mathematician at Stanford who directs a multidisciplinary think tank called the H-STAR institute, that looks at issues involving human sciences and new technologies, with a view to improving technology design and use, including applications of technology in education at all levels. (I'm also the Math Guy on National Public Radio.)


What I want to tell you about is connected with the H-STAR institute, but is based on some work I've just completed as an individual, working with a large software company in Silicon Valley.


We have spent the past four years looking to see if we can use the range of today's technologies to improve the dismal math performance level of the nation's high school students.

The slide in math performance among US children occurs during the age range 8 to 13. Essentially the middle-school years. That was the target group for our study.


Many attempts have been made to improve US middle-school mathematics education, but all have failed to achieve the desired results. I think the reason is clear. They have all focused on improving basic math skills.


In contrast, I (and a great many of my colleagues) believe the emphasis should be elsewhere. Mathematics is a way of thinking about problems and issues in the world. Get the thinking right and the skills come largely for free.


There are two reasons why the focus has been on skills. First, many people, even those in positions of power and influence don't understand what mathematics is and how it works. All they see are the skills, and they think, wrongly, that is what mathematics is about. (Given that for most people, their last close encounter with mathematics was a skills-based school math class, it is not hard to see how this misconception arises.)


The other reason is more substantial. For over two thousand years, the only way to provide mathematics education to the masses was through the written word. Textbooks. But in order to learn mathematical thinking from a textbook, you have to approach it via the skills. That means you have to master the skills first.


But as I already remarked, mathematics is not about acquiring basic skills or learning formulas. It's a way of thinking. It's not about things you know, it's something you do. And the printed word is a terribly inefficient way to learn how to do something.


The best way for an individual to learn how to do something is, as the Nike slogan says, "Just do it!"


Until now, learning by doing was not a viable approach to mathematics education. It was possible one-on-one, by an apprenticeship system, but not on a broad scale. Now it can be done.


We now have the know-how to raise the mathematical performance of our nation's schoolchildren in the 8 to 13 age-range to the top of the world rankings in a single school generation.


And that's the way we should train young people to think mathematically.


The technology to do that has been provided to us by the leisure and entertainment industries. Basically, it's videogame technology and Web 2.0 infrastructure.


No one has yet tried to do this on the scale that is required. Yes, there are a lot of so-called math ed videogames out there. Lots of them are very superficial, some are more thoughtfully designed. But they all focus primarily on skills. They use the compelling nature of videogames as a wrapper for conventional curriculum, to try to get kids to learn and practice the basic skills. But as I've noted, mastery of skills does not lead to mathematical thinking.


For over two thousand years, mastery of mathematical skills had to come before developing the higher level thinking because we did not have simulators. All we had was books. Now we know how to build simulators.

Based on the work I and my colleagues have done over the last four years, we have a pretty good sense of what it would take to build such a simulator. That's where I get my figure of $100 million over five years. Building the simulator in the first place would cost around $50 million. (That was the cost of building World of Warcraft.) The remaining amount is what it would cost to build the infrastructure to support and maintain the system for use across the nation. Once in place, it could be self-sustaining through user subscriptions.

Posted by oreydc at 1:06 PM No comments:

The Republicans have lost their minds...

7.) eHarmony...Because If People Date They Could Get Married And That Can Lead To... Dancing.

6.) Amazon.Com... Because They Sell Obscene Book Titles Like: "Mount Pleasant"

3.) Disneyland: I Think We Know Why It's The Happiest Place On Earth. Snow White, Living With 7 Unmarried Men...!

1.) Poizner, Because If You Look Carefully It Contains The Letters P-O-R-N!!

Read more
Posted by oreydc at 8:13 PM No comments: