Via Sierra Club: What We Saw in the Gulf

Executive Director Michael Brune was down in the Gulf again this week. He said that if we all saw what he saw -- pelicans struggling to fly under the weight of globs of oil, dolphins swimming through oil slicks -- we'd be storming Washington D.C. calling for leadership and action.

And that's exactly what we're going to do -- we're launching a bold new campaign to move our nation Beyond Oil.

Tell President Obama we need a plan to move America beyond its dependence on oil over the next twenty years.

Watching the largest environmental disaster in our nation's history unfold has been infuriating -- it's clear that there is no quick fix to clean up this mess. We need to make sure this type of disaster never happens again.

Are you fed up? Sickened by what you're seeing in the Gulf? This is the time to join together and help break our nation free from Big Oil's stranglehold.

The Sierra Club will be holding rallies and events, running ads, and engaging people all across the country to generate a movement to move Beyond Oil. We have never needed President Obama's visionary leadership more than we do right now -- it's time to stop letting the oil industry call the shots, and to start embracing clean energy.

We have never needed your help more, either – can we count on you to ask President Obama to deliver a visionary plan to move us beyond oil? Once you've emailed him, we'll give you the tools to get 10 of your friends involved as well.

We already have many of the clean energy solutions necessary to create a 21st-century transportation system that will move us Beyond Oil.

It's time to be bold. This is our chance to create a cleaner energy future. We need to seize it.

Thanks for all that you do to protect the environment,

Posted by oreydc at 7:03 PM No comments: Links to this post

Posted by oreydc at 5:15 PM No comments: Links to this post

A pic from my Uncle & Aunt in Yreka 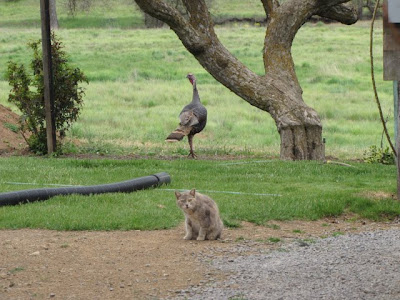 a message from friends read:

> We were at your house, but only these two were home.

Posted by oreydc at 1:38 PM No comments: Links to this post

No wonder more folks are dying from cancer than ever before. We wonder where this stuff comes from but here is an example that explains a lot of the cancer causing incidents. Hmmm.

Many people are in their cars first thing in the morning and the last thing at night, 7 days a week. As I read this, it makes me feel guilty and ill. Please pass this on to as many people as possible. Guess its not too late to make some changes

Car A/C (Air Conditioning) MUST READ!!!
Please do NOT turn on A/C as soon as you enter the car.


Open the windows after you enter your car and turn ON the AC after a couple of minutes.

According to a research, the car dashboard, sofa, air freshener emit Benzene, a Cancer causing toxin
(carcinogen - take time to observe the smell of heated plastic in your car).

Prolonged exposure will cause Leukemia, increasing the risk of cancer.

Can also cause miscarriage.

Acceptable Benzene level indoors is 50mg per sq.ft. A car parked indoors with windows closed will contain 400-800 mg of Benzene.

If parked outdoors under the sun at a temperature above 60 degrees F, the Benzene level goes up to 2000-4000 mg, 40 times the acceptable level.

People who get into the car, keeping windows closed will inevitably inhale, in quick succession, excessive amounts of the toxin.

Benzene is a toxin that affects your kidney and liver.. What's worse, it is extremely difficult for your body to expel this toxic stuff.

So friends, please open the windows and door of your car - give time for interior to air out -dispel the deadly stuff - before you enter.

'When someone shares something of value with you and you benefit from it, you have a moral obligation to share it with others.'
Posted by oreydc at 1:35 PM No comments: Links to this post

Via JMG: Robert Reich: Why We're Falling Into a Double-Dip Recession

Robert Reich: Why are we having such a hard time getting free of the Great Recession? Because consumers, who constitute 70 percent of the economy, don't have the dough. They can't any longer treat their homes as ATMs, as they did before the Great Recession. So what's the answer? In the short term, more stimulus -- especially extended unemployment benefits and aid to state and local governments that are whacking schools and social services because they can't run deficits. But the deficit crazies in the Senate, who can't seem to differentiate between short-term stimulus (necessary) and long-term debt (bad) last week shot it down. Click here to read more.

Posted by oreydc at 12:47 PM No comments: Links to this post

Via JMG: It's National Donut Day

Today is National Donut Day and the freebies are flying. Free donut with beverage purchase at Dunkin Donuts. And one free donut at Krispy Kreme, no purchase required. National Donut Day was created by the Salvation Army in 1938 to honor the volunteers who fed donuts to soldiers during World War I. Mmm, forbidden donut.

roundly reposted from Joe
Posted by oreydc at 9:29 AM No comments: Links to this post


Only you can stop the corporate takeover of California politics. Will you pledge to vote in the election on Tuesday, June 8, just a few days from now?

Big corporations think California is for sale. That's why the Chamber of Commerce is bankrolling Prop 14. It's why PG&E is spending $35 million to trick you into voting for Prop 16 so they can have a permanent monopoly. And it's why Mercury Auto Insurance is spending $15 million to pass Prop 17 so they can charge you more for your auto insurance.

On Tuesday, June 8, please vote NO on Props 14, 16 and 17. And vote YES on Prop 15, so we can start to clean up our elections and reduce the power of corporate money in politics.

We aren't going to succeed in stopping the corporate attack on California's democracy unless we get out the vote. PG&E and Mercury are counting on you staying home. Show them that their money can't buy your vote. Your friends and neighbors will join you if you tell them what's at stake and get them to the polls.

That's why I'm asking you to take the Courage Campaign's pledge to vote in the primary election. Whether you've already mailed in your ballot or will be voting in person on Tuesday, your pledge will help encourage other Californians to join you in voting in the June 8 election:

In April, Courage Campaign members voted in our statewide survey to recommend YES on Props 13 and 15, and NO on Props 14, 16, 17. Now we need to turn those recommendations into votes at the ballot box.

When progressives vote, progressives and our issues win. In 2008 Barack Obama won because a whopping 70% of Californians voted.

This year, media reports predict that just half that number -- 35% -- will vote in Tuesday's election. Prove them wrong. Your vote on Tuesday matters more now than it did in 2008 because so few people are likely to show up. Don't let the corporations win because progressives didn't turn out.

Take the Courage Campaign's pledge to vote in Tuesday's primary election -- and ask your family and friends to join you. When people pledge to vote, they will follow through and cast a progressive ballot!

Vote. Get your friends and family to vote. Let's celebrate a progressive victory on Tuesday.

P.S. Still need more information on the five initiatives on Tuesday's ballot? Need to know where your polling place is located? Looking for an opportunity to volunteer to turn out progressivess at the polls? We've got a one-stop-shop page of election resources just for you:

To power our campaign for progressive reform in California, please chip in what you can today:

Posted by oreydc at 9:21 AM No comments: Links to this post