"One good teacher outweighs a ton of books" Chinese proverb)

"The first step to wisdom is silence. The second is listening." (Source unknown)

"You can't wait for inspiration. You have to go after it with a club." (Jack London, writer)

"There is nothing so useless as doing efficiently that which shouldnot be done at all." (Peter F. Drucker, writer, professor and consultant)

"The schools ain't what they used to be and probably never were." (Will Rogers)

"A dog is the only thing on earth that loves you more than he loves himself."(Josh Billings, humorist and writer)

"I've learned that failure preceded success, and the right decisionsare an extension of the wrong ones." (Alex Spanos, founder of A.G. Spanos Cos.)

"It is not so important to know everything as to appreciate what we learn."(Hannah More, British philanthropist and writer)

"I prefer to be true to myself, even at the hazard of incurring theridicule of others, rather than to be false, and to incur my ownabhorrence."(Frederick Douglass, abolitionist, writer and speaker)

"A philosophy of mathematics that obscures the teachability ofmathematics is unacceptable."(Ruben Hers) [Received from Michael Goldenberg]

"Why love if losing hurts so much? We love to know that we are not alone." (C.S. Lewis, Irish author)

"Arriving at one goal is the starting point to another." (John Dewey, American philospher)

"An intellectual snob is someone who can listen to the William TellOverture and not think of The Lone Ranger."(Dan Rather) [Shared by Sandy Lemberg]

"High expectations are the key to everything." (Sam Walton, Wal-Mart founder)

"It is every man's obligation to put back into the world at least theequivalent of what he takes out of it." (Albert Einstein, German-born Swiss-American physicist)
"Fear not for the future, weep not for the past." (Percy Bysshe Shelley, English poet)

"He who knows only his own generation remains always a child."(Cicero - in "Orator") [From a posting by Richard Hake)

"Happiness is when what you think, what you say, and what your do arein harmony" (Mahatma Gandhi, Indian spiritual and political leader)

"The secret to staying young is to live honestly, eat slowly and lieabout your age."(Lucille Ball, actress)

"Failure is not the only punishment for laziness; there is also thesuccess of others."(Jules Renard, French author)

"In three words I can sum up everything I've learned about life: it goes on."(Robert Frost, Pulitzer Prize-winning poet)

Your Car is not an Air Conditioner!

Had a few errands today - DMV, store, off to campus... counted three folks just sitting, windows up, idling... with ac on... the temp is 79... so thought I'd post this again, in hopes that someone might be inspired to join my personal crusade. The other day I went to the ATM, and there was a young lady in a car, idling (as she waited for someone to go thru the line in the bank). So I went back to my truck, got one of the below out (that I printed before hand) and went back and knocked and “served” here the attached…

Your Car is not an Air Conditioner!

Did you know that it is illegal to sit and idle your motor?
If you are sitting in your car for more than 30 seconds, then get out and PLEASE! Turn off your car… go somewhere cool, your car is not an air conditioner!

Think about it…
1. Global warming
a. idling makes more smog
2. Air quality
a. many of us have asthma… your pollution hurts you, your family and neighbors
3. The war
a. there are thousands of people dying because of OIL
b. your consumption contributes to making war
c. There are hundreds of students that are in Iraq and who cannot continue to study here…
4. The price…
a. The more we use the more it costs!
5. PLUS! It is just plain bad for your car!

Idling your engine is wrong! A car is not an Air Conditioner!
Posted by oreydc at 11:28 AM 1 comment: Links to this post 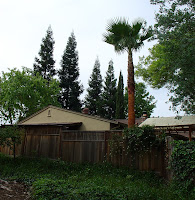 I just finished an amazing book, “The Wild Trees” by Richard Preston. It is an interesting account of my favorite trees and the search by a group of folks for the tallest tree. The final chapter ends with the filming of, and documentation of Hyperion.
See: http://news.nationalgeographic.com/news/2007/01/070123-redwoods-video.html

There is a poster you can buy of it: View of the Trunk of the Tallest Tree in the World by James P. Blair
And the article from the Chronicle about its discovery:
Eureka: New tallest living thing discovered HYPERION: At 378.1 feet, new champion in Redwood National Park on North Coast towers 8 feet above the Stratosphere Giant
Another photo of Hyperion

And another
“Hyperion” Beats out World’s Tallest Tree

And yet one more:
For Extreme Tree Hunters, Redwoods Rule
I have about 11 of these trees in my yard… the first two are so big now that I cannot get my arms around them. They are my favorite trees. The foto here is taken from the park and show our two tallest trees in the front peeking over the top of our house.