Christmas on the Ponderosa 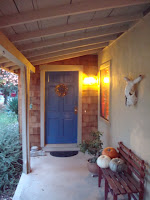 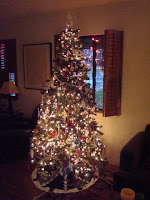 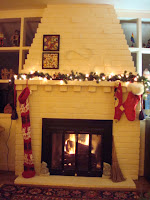 I came home yesterday and since M's car was out of the garage, so I said to myself "self, I might as well get the Xmas decorations down from the garage".
So I did.
Then I said to myself, "Self, lets see where the lights are..."
Well, one thing led to the next and pretty soon we were off and running.
It has been interesting answering all the questions from Mukunda about why we do what...
Posted by oreydc at 4:49 PM No comments: Links to this post

Before the 2001 inauguration of George Bush, he was invited to a get-acquainted tour of the White House. After drinking several glasses of iced tea, he asked Bill Clinton if he could use his personal bathroom.

When he entered Clinton's private toilet, he was astonished to see that President Clinton had a solid gold urinal. That afternoon, George told his wife, Laura, about the urinal.

"Just think," he said, "When I am president, I could have a gold urinal too. But I wouldn't do something that self indulgent!"

Later when Laura had lunch with Hillary at her tour of the White House, she told Hillary how impressed George had been at his discovery of the fact that, in the President's private bathroom, the President had a gold urinal.

That evening, when Bill and Hillary were getting ready for bed,
Hillary smiled, and said to Bill, "I found out who pissed in your saxophone."
Posted by oreydc at 7:49 PM No comments: Links to this post

My Father and FDR - by Bill Moyers

Bill Moyers gave the following remarks at the Franklin and Eleanor Roosevelt Institute's twentieth-anniversary Four Freedoms ceremony, where he received the Freedom of Speech award.

Thank you for this recognition and the spirit of the evening. Thanks especially for giving me the chance to sit here awhile thinking about my father. Henry Moyers was an ordinary man who dropped out of the fourth grade because his family needed him to pick cotton to help make ends meet.

The Depression knocked him off the farm and flat on his back. When I was born he was making two dollars a day working on the highway to Oklahoma City. He never made over $100 a week in the whole of his working life, and he made that only when he joined the union on the last job he held. He voted for Franklin Roosevelt in four straight elections, and he would have gone on voting for him until kingdom come if both had lived that long. I once asked him why, and he said, "Because the President's my friend."

Now, my father never met FDR. No politician ever paid him much note, but he was sure he had a friend in the White House during the worst years of his life. When by pure chance I wound up working there many years later, and my parents came for a visit, my father wanted to see the Roosevelt Room. I don't know quite how to explain it, except that my father knew who was on his side and who wasn't, and for twelve years he had no doubt where FDR stood. The first time I remember him with tears in his eyes was when Roosevelt died. He had lost his friend.

We can't revive the man and certainly we wouldn't want to revisit the times, but we can rekindle the spirit. There are 37 million people in this country who are poor; there are 57 million who are near poor, making $20,000 to $40,000 a year - one divorce, one pink slip, one illness away from a free fall. That's almost one-third of America still living on the edge. They need a friend in the White House. My father, with his fourth-grade education and two fingers with the missing tips from the mix-up at the cotton gin, got it when Roosevelt spoke. "I can't talk like him," he said, "but I sure do think like him." My father might not have had the words for it, but he said amen when FDR talked about economic royalism. Sitting in front of our console radio, he got it when Roosevelt said that private power no less than public power can bring America to ruin in the absence of democratic controls.

Don't think for a moment he didn't get it when Roosevelt said that a government by money was as much to be feared as a government by mob, or when he said that the political equality we once had won was meaningless in the face of economic inequality. My father got it when he heard his friend in the White House talk about how "a small group had concentrated into their own hands an almost complete control over other people's property, other people's money, other people's labor - other people's lives." My father knew FDR was talking for him when he said life was no longer free, liberty no longer real, men could no longer follow the pursuit of happiness - against economic tyranny such as this. And my father listened raptly when his friend the President said, "The American citizen" - my father knew the President was speaking of him - "could appeal only to the organized power of government."

So thank you for reminding us that liberalism is less about ideology and doctrine than about friendship and faith - the bond between a patrician in the White House and a working man on the Texas-Oklahoma border and their mutual belief in America as a shared project. Thank you for this reminder of how we might yet turn the listing ship of state.

My father thanks you, too.
Posted by oreydc at 2:36 PM No comments: Links to this post 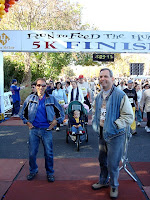 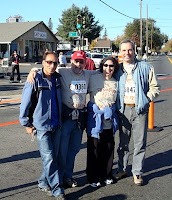 Makunda, Joe, Ruth and Milton (with Elvis in the background) 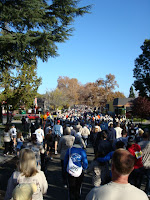 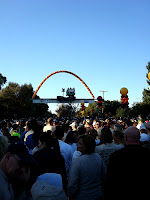 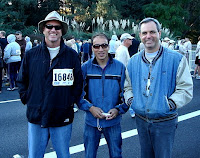 We began the day with a walk with freinds in the Run/Walk for Hunger... just about 22000 folks participated... this afternoon we are off to Jose & Loren's for Turkey @ 3!
All my very best Thanksgiving wishes to all! For those of you readying this from abroad, here is a link that explains our USAan ritual on this day:
http://en.wikipedia.org/wiki/Thanksgiving
Posted by oreydc at 11:37 AM No comments: Links to this post