The Story of Stuff

see: The Story of Stuff
Posted by oreydc at 5:26 PM No comments: Links to this post 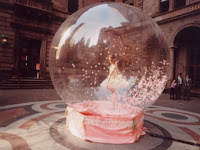 This year we are a pair of clumsy guys... during our annual tree critique nad feijoada, a wreath and lights fell offthe chimmney and crashed otneh floor, brigning with ita few santas and all the lights... early on a snow globe fell off a shelf and burst on the floor... which made me remember one of my favorite silly links:
"Snow Globes are fun. shake it"
And of course the good folks at wikipedia have posted the history of snow globes:
http://en.wikipedia.org/wiki/Snow_globe
Keep on shak'n!
Posted by oreydc at 5:02 PM No comments: Links to this post 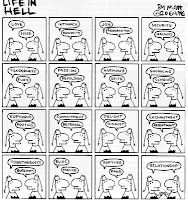 Posted by oreydc at 11:42 PM No comments: Links to this post

California won a major legal battle Wednesday in its fight to implement a global-warming law that would lead to steep increases in motor vehicle fuel economy.

A federal judge in Fresno tossed out a lawsuit filed by the world's major automakers that tried to overturn AB 1493, a law that requires a 30 percent reduction in greenhouse gas emissions by 2016.
The automakers had said the law was unconstitutional because it mandated a big jump in mileage standards - a matter that is under the authority of the U.S. Department of Transportation's National Highway Traffic Safety Administration. They further argued that the California standards would raise vehicle prices by as much as $6,000 per vhicle, leading to fewer sales and tens of thousands of auto-plant layoffs.

Last month the state sued the EPA to force a decision on its waiver request. On Wednesday EPA spokeswoman Jennifer Wood said the federal agency will rule on the request by the end of December. If the EPA turns down California's request, Gov. Arnold Schwarzenegger and other state officials have vowed to sue the government again.

The Fresno decision came as climatologists and policymakers, including many from California, convened in Bali, Indonesia, to hammer out a worldwide treaty on curbing greenhouse gas emissions.

State officials and environmentalists have said AB 1493 can be implemented using largely off-the-shelf technology. They say the additional cost per vehicle is probably no more than $1,800.
The Alliance of Automobile Manufacturers, responding to the decision, continued to criticize the California law, saying, "We need a consistent national policy for fuel economy, and this nationwide policy cannot be written by a single state or group of states - only by the fedeal government."

The alliance noted that leaders of Congress, working on a new federal energy bill, recently agreed to raise fuel economy standards for all vehicles from an average 25.3 mpg to 35 mpg by 2020. The bill has passed the House but not the Senate, and may run aground because of issues not related to fuel economy.

The judge's decision was greatly influenced by two earlier court cases. Last spring the U.S. Supreme Court ruled that the federal EPA had the duty to regulate greenhouse gases. More recently, a federal judge in Vermont threw out the automakers' lawsuit over a copycat law.

Vermont is one of 11 states that have adopted California's standards; five others are considering doing so. But all are on hold pending the EPA's decision on California's waiver request.

Environmentalists hailed Judge Ishii's ruling. "We keep winning," said David Bookbinder, a lawyer with the Sierra Club, which participated in the case. "The courts are simply not buying (the automakers') arguments."

He said he wouldn't be surprised if the automakers file an appeal, adding: "Sooner or later they're going to have to stop throwing lawyers at the problem and start hiring engineers."

Prius Versus Hummer: A Nickel for Your Thoughts

Prius Versus Hummer: A Nickel for Your Thoughts


Hey Mr. Green,I am looking to replace my 11-year-old commuter car with a new one and was thinking about getting a hybrid. But I have heard that the energy used just to produce the battery in a hybrid is more than a Hummer uses over its lifetime. Now I'm wondering if I would be better off getting a really fuel-efficient regular car.
My other concern is that the battery in a hybrid may not last for the life of the car. As you can see, I prefer to keep my cars for at least ten years. Will a hybrid battery work that long?
Please help! I want to do what's best for the environment, so I'd appreciate it if you could clarify this matter for me. —Jennifer in Downingtown, Pennsylvania


Hey Jennifer,Some wonderful urban legends have sprung up about the Prius and its battery, the most colorful being this claim about the hybrid being less ecofriendly than a Hummer. Some of the more thrilling chapters originated in one study done by a marketing company that was not peer-reviewed but, unfortunately, was widely quoted in the media. Writer George Will, who is syndicated in 450 papers, penned an April column on the topic, headlined "Use a Hummer to Crush a Prius." The story was also pumped into the Internet-disinformation pipeline by gleeful bullies for whom size is apparently quite important, and before long the Prius had morphed into a sort of traveling toxic-waste dump trailing clouds of diabolical fossil-fuel exhaust.

You can disprove most of the false claims by doing a bit of math. Regarding the hybrid battery, let's say a Hummer is driven 200,000 miles in its lifetime. Its EPA rating is 14 miles per gallon in the city and 18 miles per gallon on the highway. Let's be real generous and assume it is driven only on the highway at a reasonable speed, yielding the maximum mileage. Divide 200,000 by 18, and you're talking 11,111 gallons of gas.

Next let's calculate the Btus in that amount of gasoline and convert them to kilowatt-hours. Gasoline has between 115,000 and 125,000 Btus per gallon, so the Hummer would burn through about 1.3 billion Btus over those 200,000 miles. Since there are 3,412 Btus in a kilowatt-hour (kWh) of energy, this would convert to almost 400,000 kilowatt-hours, which, at the rock-bottom price of five cents per kilowatt-hour, would be about $20,000, or almost as much as the price of a Prius. If the energy to make the hybrid battery came from fuel oil, which has around 140,000 Btus per gallon, it would take an estimated 9,524 gallons of oil to match the Hummer's 1.3 billion Btus. At $2 a gallon, that's also about $20,000.

Now if Toyota is truly spending that much money on the battery alone, U.S. automakers can stop worrying about the Japanese competition pronto. Either that, or Toyota is cooking up the most brilliant marketing strategy in the history of modern capitalism: investing unprecedented prodigious funds in a loss leader!

In any case, the study indicting the Prius has been discredited by a number of reliable sources since its appearance early this year. As David Friedman, the research director of the Union of Concerned Scientists' Clean Vehicles program, put it: "This study has been completely contradicted by studies from MIT, Argonne National Laboratory, and Carnegie Mellon's Lifecycle Assessment Group. The reality is hybrids can significantly cut global-warming pollution, reduce energy use, and save drivers thousands at the pump."

Among the many critics of Hummer hugging, Peter Gleick of the Pacific Institute noted that one of the many flaws of the CNW Marketing study is that it is based on fudged figures. As he points out, it assumes a Hummer would travel 379,000 miles in its lifetime and last 35 years, whereas a Prius would only go 109,000 miles and last 12 years. So of course, using these figures, the amount of energy needed to make the Prius is going to come out high on a per-mile basis. (Who knows? In real-world time the Hummer might well have a shorter life because when the owners get bored with their mega-toys and want to dump them, no one may want to buy these gas hogs. Note also that I could've fudged and used that 379,000-mile figure, which would've jacked up the Hummer's lifetime energy use for fuel alone to a value of around $37,000.)
Getting back to the Prius's nickel metal hydride battery, laments about its other environmental iniquities were largely based on reports of environmental devastation from nickel mining in Sudbury, Ontario, where 10 percent of the world's nickel is mined. The problem is that these reports described Sudbury 30 years ago, not today. Yes, nickel mining is a nasty business, but in the 1970s, Sudburians started to clean up the mining mess and make huge strides in rehabilitating their environment. As Canadian Geographic declared recently in giving one Sudbury group an award for restoration, "Once derided for its barren landscape, Sudbury, Ontario, has experienced an environmental makeover since the 1970s. Today, the former industry-blighted moonscape has been transformed."

In any case, Prius batteries, which contain 32 pounds of nickel each, require only a fraction of the world's supply. More than 94 percent of the 1.55 million tons of nickel mined each year is used for stainless steel, alloys, and electroplating. So the batteries for the one million hybrids Toyota has sold so far have required only one percent of the world's annual nickel-mining production. Since the estimates on nickel recycling indicate about 80 percent is being reused, a million Priuses' share of newly mined nickel would really only be about two-tenths of one percent.

Additionally, Toyota researchers say that a Prius battery will last for at least 180,000 miles. There's no reason to believe that the company is inflating its figures, for the simple reason that Toyota issues an eight-year or 100,000-mile warranty on their batteries. Company representatives say that very few batteries have failed and that some fleet cars have already racked up 200,000 miles and the batteries are still going strong. The Prius batteries are also completely recyclable, and Toyota's recycling program even issues a $150 credit when they're finally retired.

Finally, after much Hummering and hawing, there remains your question whether you'd be better off getting a "really fuel-efficient regular car." Well, you might. As previously reported here, I've driven another Toyota, the Corolla, and gotten 42 miles per gallon, a mile more than its official EPA rating. That's pretty competitive with the Prius, especially when you consider that the Corolla costs about $7,000 less. So that regular car may be a sensible alternative to the Prius, but not because the Prius is environmentally worse than the Hummer.

Environmentally,Mr. Green
------------------------------------
Views expressed by readers may not reflect those of Mr. Green or Sierra magazine. Reader suggestions have not been researched or tested.
Read more advice from Mr. Green, including his Web-only mailbag, and submit your own environmental questions at sierraclub.org/mrgreen.
Posted by oreydc at 1:11 PM No comments: Links to this post

and then of course there is:
California State University: It Needs to Strengthen Its Oversight and Establish Stricter Policies for Compensating Current and Former Employees
Posted by oreydc at 11:50 AM No comments: Links to this post

Christmas on the Ponderosa 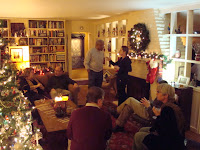 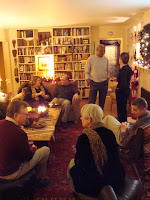 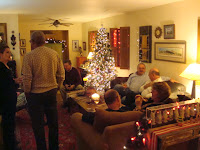 Our Annual Holiday Tree Critique on the Ponderosa... you can see in detail here how quickly the group broke into intense discussions about the tree and the decorations...
Luckily no one was hurt during the collapse of the wreath over the hearth...
It was great fun!

Posted by oreydc at 2:28 PM No comments: Links to this post

SPEECH BY AL GORE ON THE ACCEPTANCEOF THE NOBEL PEACE PRIZEDECEMBER