Brasil is going to produce the VW Buss on its 50th anniversary.
Posted by oreydc at 5:46 PM No comments: Links to this post

I haven't laughed this much in a long time...

http://www.youtube.com/watch?v=RSBXS1npqNI&feature=related
Posted by oreydc at 10:45 PM No comments: Links to this post

How Much Is a Trillion?

How Much Is a Trillion?

The 2009 budget proposed by President Bush weighs in at $3.1 trillion. But just how big is a trillion, anyway? $1 trillion would be enough to buy about 1,000 boxes of Girl Scout cookies for every person in the U.S. Author David M. Schwartz weighs in how to wrap your head around really big numbers.

listen on line at: http://www.npr.org/templates/story/story.php?storyId=18801012
Posted by oreydc at 12:52 PM No comments: Links to this post

************************
From the Asbury Park Press [Neptune-Asbury Park, N.J.], Thursday, January 31, 2008. See http://www.app.com/apps/pbcs.dll/article?AID=/20080131/NEWS02/801310678/1070/NEWS02 . Abstract appeared on the SmartBrief listserve, Wednesday, February 6, 2008.
************************
Young students use crayons to learn about diversity
By Chris Lundy
Kim Troncone's first-grade students opened their crayon boxes to draw a picture but found a surprise: They only had one crayon.
The students at Veterans Memorial Elementary School were taking part in a lesson on diversity, inspired by the Rev. Martin Luther King Jr.Sean Aubrey, 6, was stuck with just an orange crayon.
Thus, he drew an orange."An orange crayon doesn't really make a lot," he said.
Then, Troncone gave them all the colors they were missing.Sean's new drawing had a blue car, a playground, monkey bars and a tree.
During the lesson, they read "The Crayon Box that Talked" by Shane DeRolf, which showed how all the colors in the box can get along.In part of the book they read, the black crayon was ostracized by the others.
"(The crayons) didn't like each other" in the story, said Emily Bahrenburg, 6.
But by the end, they had all become friends."They all have a special thing about them," she said.Emily had a black crayon.
Initially, she could only draw a black tent.Children this young are far removed from the days of segregation, and they found the idea of separate water fountains or sections of the bus silly, Troncone said.
On a poster in the classroom, there is a statement that begins, "My dream is . . ." and students filled out responses, including "for brown and white people to play together at the playground," "to have friends who are different than me" and "that Dr. King was alive.
"Krista Panariello, 7, lucked out with a green crayon. She had lots of things to draw, like grass, grapes and even a crown."
I have a crown that's green. It's Tinkerbell," she said.Add the rest of the rainbow, and she was able to draw a little bit of everything, including a cat, zebra, spider, caterpillar, the sun and sky.
Part of the lesson included students talking about what sets them apart, such as eye and hair color, but more importantly, what they have in common, Troncone said."They really got it," she said.
Or, as Krista put it, "It's special when you're different."
Posted by oreydc at 6:03 PM No comments: Links to this post 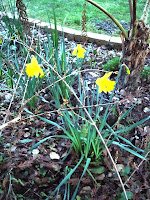 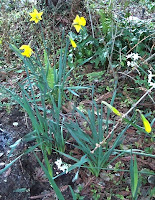 Posted by oreydc at 5:00 PM No comments: Links to this post 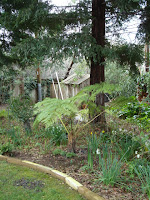 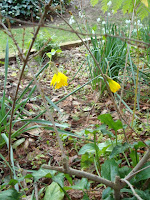 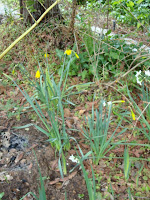 was yesterday... after all this rain and wind there are daffodils lurking beneath the redwoods! These are the first ones in our yard for 2008. The Australian tree fern that Loren & Jose gifted us is putting up a new frond... so life is good...woo hoo!

Posted by oreydc at 1:55 PM No comments: Links to this post