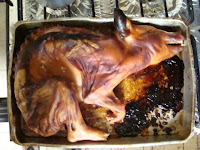 I woke up to strains of "Silent Night" being played at a neighbors, and a child riding her new bike by and greeting everyone with a “Feliz Natal a vocês”.... and of course the smell of roast pork, chicken and beef is in the air. It was a rather nice way to wake up after a fun evening.

The family stayed up late, dancing and and having fun before exchanging presents in a funny game. At midnight they broke out the champaign, and wished each other Feliz Natal, while the fireworks went off overhead... it was great fun. Let me explain.

Xmas, not being an orgy of gift giving here, is at least with this family somewhat subdued, especially now the crianças are grown. A few weeks ago Tata called and gave each of us the name of our amigo secreto and we were instructed to not buy for more than R$20.00. Last night we showed up at Regina & Ayrton´s house and near midnight, the first person stood, made a speech about the secret person, and we had to guess… when we did they gave them their present. Oh, and you had to pop a balloon on their lap by sitting on them… which I finally understood why they had put me to inflating balloons when I got there. the Rosal is not known for is decorum, and is no exception… it was great fun! My sogra, had drawn my name, and got all flustered… so all she said was “he’s sexy”… and they all guessed it was me… buhahaha… I guess the bloom isn´t off this rose yet! I like how simple and silly and unpretentious folks are here. Its all about fun and making jokes and just enjoying each other.

Tata, by then three sheets to the wind, gave a nice speech about how this family is united, and how lucky we all are (she was abandoned by her mother and came to live with the family, so tho we call her sister, technically she’s a cousin). I agree… they are great, and I no longer feel like the visiting anthropology professor, but a member of a grand extended family.

My sogra, was worried that she had to get up early and cook the leitoa, and Tiago let her know that he would call her and wake her up, which he did as as you can see as its ready!

I was sitting there, watching, thinking, that this is what it’s supposed to be like. I am so lucky… I love these folks more than I can say. At any rate its noon, and I had better go... they are setting the table. Gotta try that roast pig!