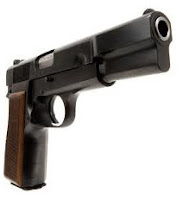 
The bill to make the Browning M1911 the official gun breezed through a committee hearing this week and is scheduled to be debated by the full House as early as Wednesday. Republican Rep. Carl Wimmer said the state should have the gun as one of its state symbols to honor John Browning, a Utah native who invented it in 1911. "He invented a firearm that has defended American values and the traditions of this country for 100 years," Wimmer told the House Political Subdivisions Committee. The committee approved the bill to add a state gun on a 9-2 vote.