Via JMG: Another Time Tunnel Trip With Crazy Eyes 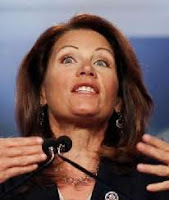 "What people recognize is that there's a fear that the United States is in an unstoppable decline. They see the rise of China, the rise of India, the rise of the Soviet Union and our loss militarily going forward. And especially with this very bad debt ceiling bill, what we have done is given a favor to President Obama and the first thing he'll whack is five hundred billion out of the military defense at a time when we're fighting three wars. People recognize that." - Michele Bachmann.