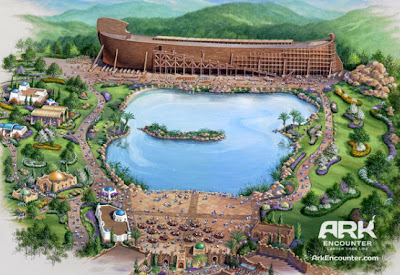 Kentucky's Ark Encounter theme park, whose replica of Noah's Ark will be "actual size," just got a huge present from the city.

The city of Williamstown in Grant County has agreed to give a biblically themed amusement park a property tax discount of 75 percent over the next 30 years. Mayor Rick Skinner said the offer is laid out in a memorandum of agreement that will be followed by a formal tax-increment financing deal with Petersburg-based Ark Encounters LLC in coming months. The tax deal is in addition to almost $200,000 given to the company by Grant County's economic development arm as an enticement to keep the project located there, along with 100 acres of reduced-price land. And that's not counting the state's promise of $40 million worth of sales tax rebates and a possible $11 million in improvements to the interstate near the project that would be financed by the Kentucky Transportation Cabinet.

No matter how shitty the economy, there's always money for Jeebus.