Via You can't have a Tea Party without some Fruitcakes and Nuts's Photos FB: 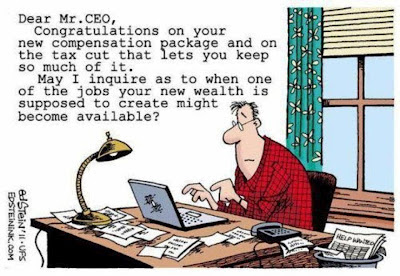 Posted by oreydc at 11:21 PM No comments: Links to this post 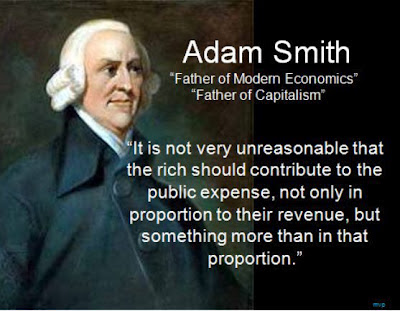 Posted by oreydc at 4:25 PM No comments: Links to this post

Media Connecting The Dots On U.S. Storms, Heat And Wildfires: ‘This Is What Global Warming Looks Like’
Posted: 03 Jul 2012 09:32 AM PDT
Who’s connecting the dots on the extraordinary bout of extreme weather events hitting the U.S.? No, it’s not the “liberal” media. It’s Matt Drudge of the Drudge Report, the popular conservative news aggregation site.
Here’s the Drudge Report highlighting a fantastic story from the Associated Press today:

The U.S. is getting hit by a range of powerful extreme weather events this summer. Record droughts in the West and Midwest are fueling historic wildfires, putting pressure on farmers, and driving up crop prices. Extreme “hurricane-like” storms took eastern states by surprise over the weekend, knocking out power to millions of people and leaving them sweltering in an ongoing heat wave. Across the country in June, more than 3,000 heat records were broken. That was after an off-the-charts heat wave in March where heat records blew out cold records 12-1.
With all these events occurring simultaneously, climate scientists are being more blunt than ever — and journalists are finally connecting the dots in their stories. In the last few days, we’ve seen a number of excellent pieces making the connection between these events and climate change. The latest is from Associated Press science writer Seth Borenstein:


So far this year, more than 2.1 million acres have burned in wildfires, more than 113 million people in the U.S. were in areas under extreme heat advisories last Friday, two-thirds of the country is experiencing drought, and earlier in June, deluges flooded Minnesota and Florida.
“This is what global warming looks like at the regional or personal level,” said Jonathan Overpeck, professor of geosciences and atmospheric sciences at the University of Arizona. “The extra heat increases the odds of worse heat waves, droughts, storms and wildfire. This is certainly what I and many other climate scientists have been warning about.”
“What we’re seeing really is a window into what global warming really looks like,” said Princeton University geosciences and international affairs professor Michael Oppenheimer. “It looks like heat. It looks like fires. It looks like this kind of environmental disasters.”
Oppenheimer said that on Thursday. That was before the East Coast was hit with triple-digit temperatures and before a derecho — an unusually strong, long-lived and large straight-line wind storm — blew through Chicago to Washington. The storm and its aftermath killed more than 20 people and left millions without electricity. Experts say it had energy readings five times that of normal thunderstorms.

Greenhouse gases from man-made sources are putting a lot of extra energy into the atmosphere. In fact, the radiative forcing of all the CO2 humans have dumped into the air is equal to about 1 million Hiroshima nuclear bombs per day.
Scientists often compare that extra energy to a baseball slugger on steroids. While it’s difficult to look at a specific home run and say steroids were the only reason it happened, it’s much easier to show that the drugs increased the likelihood the ball made it over the fence. The same is true for climate steroids like CO2. All that extra energy in the atmosphere increases the probability and intensity of extreme weather events, making the droughts, storms and wildfires Americans are facing this summer far more likely and far more destructive.
As NBC Washington’s Chief Meteorologist, Doug Kammerer, explained on air “If we did not have global warming, we wouldn’t see this.”
Also helping connect the dots on these events, PBS recently featured a six-minute interview with Kevin Trenberth, a senior scientist with the National Center for Atmospheric Research. Trenberth does an excellent job explaining the combination of factors that make extreme weather events more likely, finishing the interview with a blunt warning: “This is a view of the future, so watch out.”
Here are some excerpts from the interview:

“I don’t think there has been anything quite like this before….the odds are changing for these to occur with…the global warming from the human influences on climate.”
“You look out the window and you see climate change in action. This is the way it gets manifested…now we’re in the peak of the heat season and now we’re going outside the realm of conditions previously experienced. And so that’s when the damage really comes extreme and we get all these wildfires, houses have been burned, tremendous damage to the environment, and maybe some other consequences to come. These are all manifestations of climate change that we expect to see more of as time goes on.”
“It’s easy to break an individual record because the weather system happens to be at that particular location. With an unchanging climate you expect that the number of highs and the number of low temperature records are about the same. And that was the case in the 1950′s, 60′s and 70′s. And then by the 2000′s, we were breaking high temperature records at a ratio of 2 to 1 over cold temperature records. But this year, we’ve been breaking high temperature records at a rate of about 10 to 1. Ironically, there are still some cool spots — mainly in the Pacific Northwest and cold temperature records continue to be broken. So breaking records is not an indication of climate change, but breaking records at a rate of 10 to 1 versus the cold records, that’s a clear indication of climate change.”
“This is a view of the future, so watch out.”

It’s good to see such a broad range stories connecting the dots between climate change and extreme weather. Unfortunately, it usually happens when the problem is on doorstep.
Here are more details on the heat wave from Climate Central:

And here are some stunning local records via Climate Central:
Mother Nature is just getting warmed up. 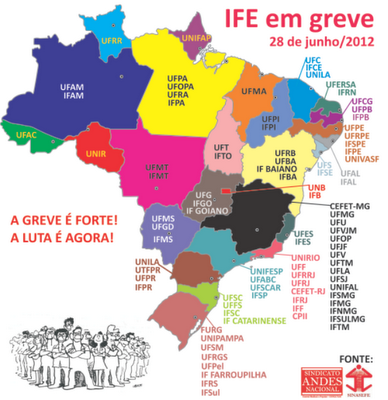 Posted by oreydc at 11:45 AM No comments: Links to this post 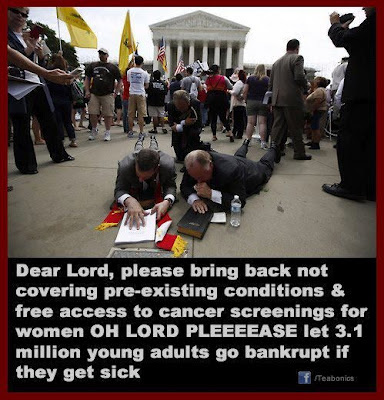 Posted by oreydc at 12:56 AM No comments: Links to this post 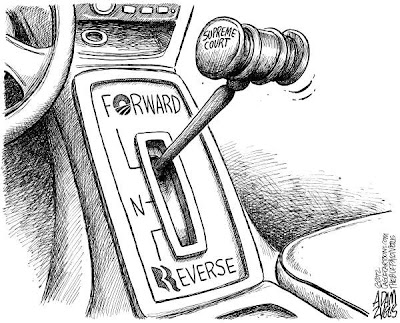 Check out how the nation's editorial cartoonists reacted to yesterday's Supreme Court ruling.


Reposted from Joe
Posted by oreydc at 12:53 AM No comments: Links to this post