The plan was for supporters to bring hurricane relief supplies to the event, and then deliver the bags of canned goods, packages of diapers, and cases of water bottles to the candidate, who would be perched behind a table along with a slew of volunteers and his Ohio right-hand man, Senator Rob Portman. To complete the project and photo-op, Romney would lead his crew in carrying the goods out of the gymnasium and into the Penske rental truck parked outside.
But the last-minute nature of the call for donations left some in the campaign concerned that they would end up with an empty truck. So the night before the event, campaign aides went to a local Wal Mart and spent $5,000 on granola bars, canned food, and diapers to put on display while they waited for donations to come in, according to one staffer. (The campaign confirmed that it "did donate supplies to the relief effort," but would not specify how much it spent.) But even as Romney, clad in blue jeans and rolled-up sleeves, hustled around his area of the gym, shaking hands, thanking supporters, and stacking cases of bottled water on top of each other, signs of stagecraft remained.

As supporters lined up to greet the candidate, a young volunteer in a Romney/Ryan t-shirt stood near the tables, his hands cupped around his mouth, shouting, "You need a donation to get in line!" Empty-handed supporters pled for entrance, with one woman asking, "What if we dropped off our donations up front?" The volunteer gestured toward a pile of groceries conveniently stacked near the candidate. "Just grab something," he said. Two teenage boys retrieved a jar of peanut butter each, and got in line. When it was their turn, they handed their "donations" to Romney. He took them, smiled, and offered an earnest "Thank you."


Reposted from Joe
Posted by oreydc at 5:37 AM No comments: 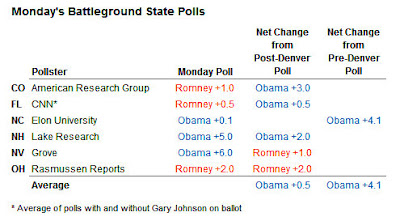 
Reposted from Joe
Posted by oreydc at 5:25 AM No comments:

Via Anti-Republican Crusaders and the Movement to Strengthen Progressive Values's photo/ FB:

Don't let the government trample on you !

Don't fall for a culture of dependency !

Fix your own power lines ! You can build it !
Posted by oreydc at 5:24 AM No comments: 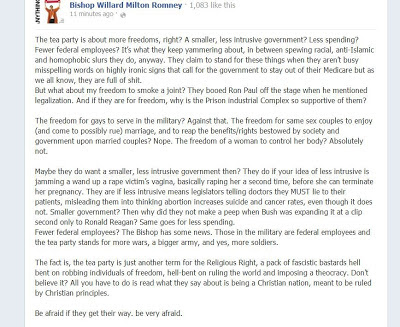 Posted by oreydc at 5:02 PM No comments:


Though it took Mr. Obama some time to do it, he overcame his hesitation about same-sex marriage and declared his support. That support has helped spur marriage-equality movements around the country. His Justice Department has also stopped defending the Defense of Marriage Act against constitutional challenges. Mr. Romney opposes same-sex marriage and supports the federal act, which not only denies federal benefits and recognition to same-sex couples but allows states to ignore marriages made in other states. His campaign declared that Mr. Romney would not object if states also banned adoption by same-sex couples and restricted their rights to hospital visitation and other privileges.
Mr. Romney has been careful to avoid the efforts of some Republicans to criminalize abortion even in the case of women who had been raped, including by family members. He says he is not opposed to contraception, but he has promised to deny federal money to Planned Parenthood, on which millions of women depend for family planning. For these and many other reasons, we enthusiastically endorse President Barack Obama for a second term, and express the hope that his victory will be accompanied by a new Congress willing to work for policies that Americans need.


Reposted from Joe
Posted by oreydc at 4:39 PM No comments:

We're ticked off at your Teanderthal attitudes and politics and we've decided we're leaving. We in the Blue States intend to form our own country. In case you aren't aware, that includes California, Hawaii, Oregon, Washington, Minnesota, Wisconsin, Michigan, Illinois and the rest of the Northeast.

We believe this split will be beneficial to the nation and especially to the people of the new country of The Enlightened States of America (E.S.A).

To sum up briefly:

You get Texas, Oklahoma, and all the antebellum mansions you care to trick up for foreign tourists.

We get stem cell research and the best beaches. You get to clean up the oil spills in the Gulf.

We get Andrew Cuomo and Elizabeth Warren. You get Bobby Jindal and Todd Akin.

We get the Statue of Liberty. You get OpryLand.

We get Intel and Microsoft. You get WorldCom.

We get Harvard. You get Ole Miss.

We get 85 percent of America's venture capital and entrepreneurs. You get Alabama.

We get two-thirds of the tax revenue. You get to try to make the red states pay their fair share.

Since our aggregate divorce rate is 22% lower than that of the Christian Coalition, we get a bunch of happy families. You get a bunch of deadbeat dads and single moms.

With the Blue States in hand we will have firm control of 80% of the country's fresh water, more than 90% of the pineapple and lettuce, 92% of the nation's fresh fruit, 95% of America's quality wines (you can serve French wines at state dinners) 90% of all cheese, 90% of the high tech industry, most of the US low sulphur coal, all living redwoods, sequoias and condors, all the Ivy and Seven Sister schools plus Harvard, Yale, Stanford, Princeton, Cal Tech and MIT.

With the Red States you will have to cope with 88% of all obese Americans and their projected health care costs, 92% of all U.S. mosquitoes, nearly 100% of the tornadoes, 90% of the hurricanes, 99% of all Southern Baptists, virtually 100% of televangelists, Rush Limbaugh, Bob Jones University, Clemson and the University of Georgia.

We get Hollywood and Yosemite and Yellowstone, thank you very much.

Thirty-eight percent of those in the Red states believe Jonah was actually swallowed by a whale, 62% believe life is sacred unless we're discussing the death penalty or gun laws, 44% say that evolution is only a theory, 53% that Saddam was involved in 9/11 and 61% of you crazy bastards believe you are people with higher morals than us lefties --who have actually READ our Bibles.

We're taking the good weed, too. You can have that crap they grow in Mexico.

Citizens of the Enlightened States of America

Posted by oreydc at 3:07 PM No comments:

Via I'm Proud of My President / FB: 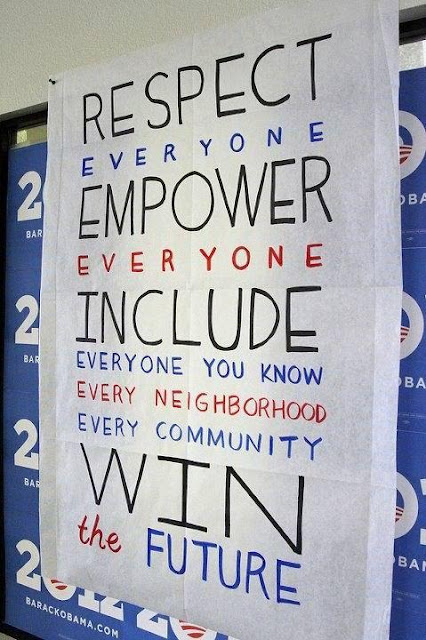 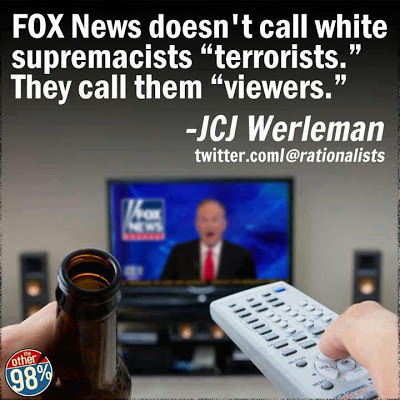 Posted by oreydc at 7:45 AM No comments:

Via GoComic.org: Doonesbury by Garry Trudeau 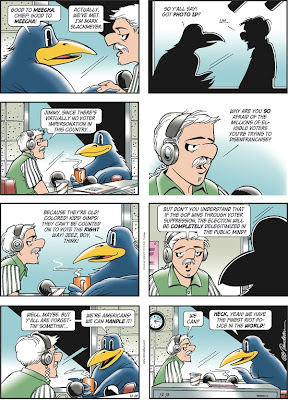 Posted by oreydc at 7:21 AM No comments: