Via JMG: Bucks For Bauman 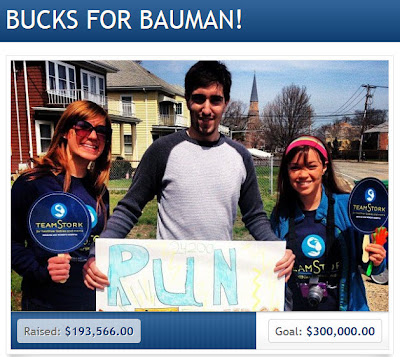 A crowdfunding website to pay the medical expenses of bombing victim Jeff Bauman has already raised almost $200,000. Bauman lost both of his legs in the attack and a gruesome photo of his injuries instantly became one of the tragedy's most haunting images. He is also the only person to provide the FBI with an eyewitness description of one of the bombers, scrawling an initial note from hospital bed that read, "Bag. Saw the guy. Looked right at me."
Think Progress reports on the Bauman fundraising campaign and laments the state of health insurance.

The 27-year-old’s story is particularly tragic considering that he lives in Massachusetts, the state that gave birth to Obamacare and has the lowest uninsurance rate in the country. Unfortunately, Bauman — who worked part-time at Costco and was planning on going back to school — is one of the mere 1.9 percent of Massachusetts residents without health coverage. He likely would have gained insurance under his school’s health plan had he made it there before the bombings.
Bauman has been fortunate enough to receive an impressive number of donations to help him pay his bills, and his uncle plans to buy him his first pair of prosthetic legs. But many other victims in the Boston bombings may not be as fortunate. The cost of treating the bombing survivors’ injuries is expected to exceed $9 million. The out-of-pocket costs associated with that treatment could bury many of the victims financially, even if they do have insurance — unless hospitals, insurers, and charitable foundations swoop in to help, as they did after the mass shooting in Aurora, Colorado.


posted by Joe
Posted by oreydc at 3:09 PM No comments: Links to this post