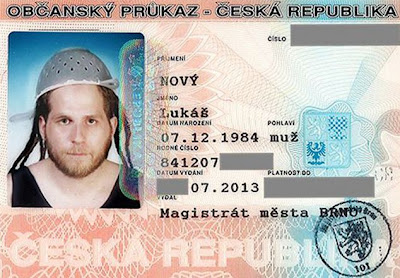 A man in the Czech Republic has won his religious battle to wear a pasta strainer on his head for his official government ID photo.

Prankster Lukas Novy, from Brno in the Czech Republic, claims that his Pastafarian faith means he has to wear the sieve at all times. Officials ruled that turning down Novy's request would be a breach of the country's religious equality laws. Brno City Hall spokesman Pavel Zara explained: 'The application complies with the laws of the Czech Republic where headgear for religious or medical reasons is permitted if it does not hide the face.' Novy claims to be a member of the Church of the Flying Spaghetti Monster, when emerged in the USA as spoof on organised religion. According to its tongue-in-cheek website their 'only dogma ... is the rejection of dogma'. Members claim to believe that an invisible alien made of spaghetti and meatballs created the universe after 'drinking heavily.'

All praise His noodly appendage!

Wil Wheaton - Why it's awesome to be a nerd


Posted by oreydc at 7:36 AM No comments: Links to this post

Via JMG: Sweden Runs Out Of Garbage


An interesting report notes that Sweden's national recycling program is so successful, they've actually run out of garbage.


Sweden’s waste management and recycling programs are second to none as only four percent of the nation’s waste ends up in landfills. By contrast, according to the U.S. Environmental Protection Agency, over half of the waste produced by U.S. households ends up in landfills. Because the Swedish manage waste so effectively and then use what remains to partly power their country, they are now living an environmentalist’s dream; a shortage of garbage. In order to continue fueling the waste-to-energy factories that provide electricity to a quarter of a million homes and 20 percent of the entire country’s district heating, Sweden is now importing trash from the landfills of other European countries. In fact, those countries are paying Sweden to do so.


Reposted from Joe
Posted by oreydc at 2:15 PM No comments: Links to this post

Propaganda Terms in the Media and What They Mean - Noam Chomsky


Posted by oreydc at 6:43 AM No comments: Links to this post