Can the music industry survive the streaming revolution?

Thank you to Occupy Democrats for creating this image!

National Committee to Preserve Social Security and Medicare
This week, the House GOP's first order of business was to attack ‪#‎SocialSecurity‬. They are doing their best to pit retirees vs. the disabled in an effort to cut Social Security benefits.

Via Salon: Why I fled libertarianism — and became a liberal A photo of the author

The night before the 2008 Nevada Republican convention, the Ron Paul delegates all met at a Reno high school. Although I’d called myself a libertarian for almost my entire adult life, it was my first exposure to the wider movement.

And boy, was it a circus. Many members of the group were obsessed with the gold standard, the Kennedy assassination and the Fed. Although Libertarians believe government is incompetent, many of them subscribe to the most fringe conspiracy theories imaginable. Airplanes are poisoning America with chemicals (chemtrails) or the moon landings were faked. Nothing was too far out. A great many of them really think that 9-11 was an inside job.

Even while basking in the electoral mainstream, the movement was overflowing with obvious hokum.

During the meeting, a Ron Paul staffer, a smart and charismatic young woman, gave a tip to the group for the upcoming convention.

“Dress normal,” she said. “Wear suits, and don’t bring signs or flags. Don’t talk about conspiracy theories. Just fit in.” Her advice was the kind you might hear given to an insane uncle at Thanksgiving.

Then next day, I ran into that same operative at the convention, and I complimented her because Ron Paul delegates were being accepted into the crowd. I added, “We‘re going to win this thing.”
“Bring in the clowns,” she said, and smiled before I lost her in the mass of people.

I will never forget that moment: Bring in the clowns. At the time, I considered myself a thoughtful person, yet I could hardly claim to be one if you judged me by the company I kept. The young lady knew something I had not yet learned: most of our supporters were totally fucking nuts.

I came by my own libertarian sensibilities honestly. I grew up in a mining town that produced gold, silver and copper; but above all, Battle Mountain, Nev. made libertarians. Raised on 40-acre square of brown sage brush and dead earth, we burned our own garbage and fired guns in the back yard.

After leaving my small town upbringing, I learned that libertarians are made for lots of reasons, like reading the bad fiction of Ayn Rand or perhaps the passable writing of Robert Heinlein. In my experience, most seemed to be poor, white and undereducated. They were contortionists, justifying the excesses of the capitalist elite, despite being victims if libertarian politics succeed.

If you think that selfishness and cruelty are fantastic personal traits, you might be a libertarian. In the movement no one will ever call you an asshole, but rather, say you believe in radical individualism.

Read the full article here
Posted by oreydc at 2:36 PM No comments:

Via The Teanderthal Party's FB: 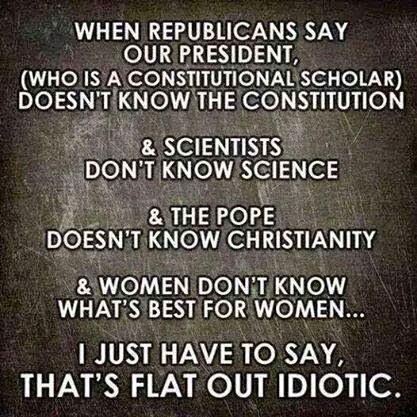 Posted by oreydc at 4:43 AM No comments: