Via JMG: REPORT: Movie Shooter Was A Teabagger


The man identified as killing two people and wounding nine more in last night's shooting is John Russell Houser, 59, of Alabama. He's also known as Rusty Houser, and apparently has a presence on social media as an outspoken conservative. The last thing someone posting as Rusty Houser posted on Facebook was in 2013, when he linked to an article called "A woman's place in the church and the weak church elder." He wrote, "The bible doesn't ask me to like what it says, only to obey it. Death comes soon to the financially failing filth farm called the US." He only had two things liked on Facebook, among them "I hate liberals!" In addition, a John Russell Houser from Phenix City, Alabama, is listed as a member of a group called the Tea Party Nation. However, KATC could not confirm if this John Russell Houser is one in the same with the shooter.


Reposted from Joe Jervis
Posted by oreydc at 9:37 AM No comments:

Via JMG: This Week's New Yorker 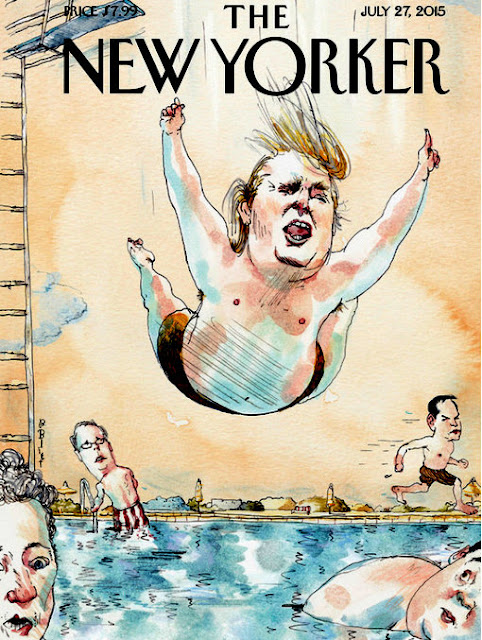 
Donald Trump’s turn in the national spotlight is mainly taking a toll on Ted Cruz, the Texas firebrand running as an uncompromising, anti-establishment conservative. That’s the assessment of this week’s POLITICO Caucus, our weekly survey of the leading strategists, activists and political operatives in Iowa and New Hampshire. Roughly a third of Iowa and New Hampshire Republican insiders pointed to Cruz as the candidate who is damaged the most in their states by Trump’s rise in the polls and emergence as a media-grabbing protest candidate. “The Trump Circus is no doubt having the biggest impact on Ted Cruz. Cruz, the incumbent proxy for the disaffected GOP “Hell No!” Caucus, has been virtually starved of oxygen since Trump entered the race,” said an Iowa Republican, who, like all POLITICO Caucus participants, was granted anonymity in order to speak freely.


Reposted from Joe Jervis
Posted by oreydc at 5:56 AM No comments: