Via JMG: Name That Game Show 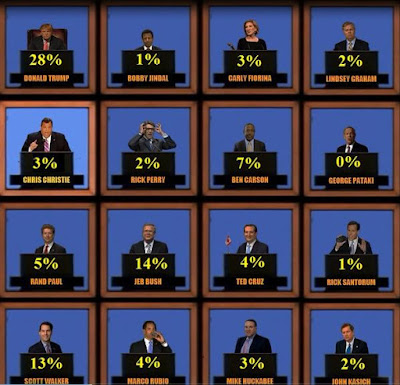 
Reposted from Joe Jervis
Posted by oreydc at 8:03 AM No comments: Links to this post

Via JMG: Lion-Killing Dentist Goes On The Lam

Walter Palmer, the American dentist charged in the killing of Africa's "most famous lion" has reportedly gone into hiding.

Emmanuel Fundira, the president of the Safari Operators Association of Zimbabwe, confirmed at a news conference on Tuesday that Dr. Walter Palmer is wanted for the death of Cecil the lion but that his whereabouts were unknown. Police spokeswoman Charity Charamba said 'we are looking for Palmer' who allegedly paid $55,000 (£35,000) for a big game permit and traveled from his home town of Minneapolis to Africa to kill the lion. Dr. Palmer's hunting colleagues, Zimbabwean hunter Theo Bronkhorst and local landowner Honest Ndlovu are due to appear in court this week on poaching charges for allegedly killing Cecil. "We arrested two people and now we are looking for Palmer in connection with the same case," said Charamba. The much loved big cat was wounded by an arrow after he was allegedly lured out of the national park by the hunter's bait. After spending two days tracking the injured beast, Cecil was eventually found and shot dead. The corpse was then skinned and the head hacked off as a trophy.

While Palmer's current location is unknown, this afternoon the Minneapolis Star-Tribune published his statement.

"In early July, I was in Zimbabwe on a bow hunting trip for big game. I hired several professional guides and they secured all proper permits. To my knowledge, everything about this trip was legal and properly handled and conducted. I had no idea that the lion I took was a known, local favorite, was collared and part of a study until the end of the hunt. I relied on the expertise of my local professional guides to ensure a legal hunt. I have not been contacted by authorities in Zimbabwe or in the U.S. about this situation, but will assist them in any inquiries they may have. Again, I deeply regret that my pursuit of an activity I love and practice responsibly and legally resulted in the taking of this lion."

Palmer's accomplices face up to either ten or fifteen years in a Zimbabwean prison, according to conflicting reports. It's not clear what punishment Palmer would face should he be extradited back to Africa. An extradition treaty between the United States and Zimbabwe was signed in 1997 and went into effect in 2000.


Reposted from Joe Jervis
Posted by oreydc at 4:29 PM No comments: Links to this post

Jack Black and Morgan Freeman Drop the Mic on the #IranDeal


Posted by oreydc at 4:25 PM No comments: Links to this post