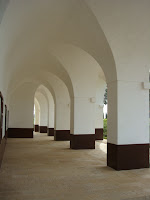 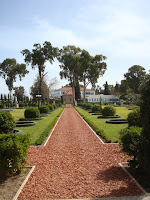 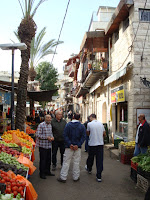 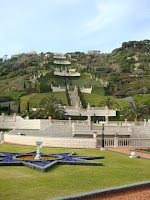 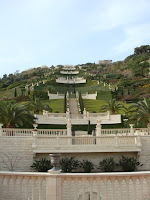 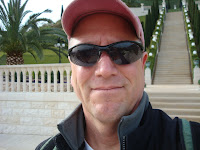 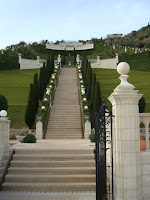 A grand day out… Jet lag made we wake up early… 4am here, so read for awhile and then went to breakfast. Was out by 8am. Used my visitor’s pass to go down the mountain on the terraces of the Bahá’í Gardens. Just spectacular. I was the only one walking about, and as I neared midway, the fountains slowly sprang to life… they trickle down the side of the stairways as well… beginning at the very top… absolutely amazing.

Then walked through the old part of the city, and took a sharoot to Bahji. That alone was a n adventure for !5 sheckles. &1.00 = 3.3 Sheckles. Spent the whole day, walking meditating… again, being early I was able to have the whole shrine to myself for ½ hour… it was really nice… as the day went on, the crowds grew. Took a sharoot aznd a bus up the mountain back and am lazing about for awhile before I go out and see what is happening.

Gotta go find me some falafel.... tomorrow the conference starts.
Posted by oreydc at 7:40 AM No comments: Links to this post 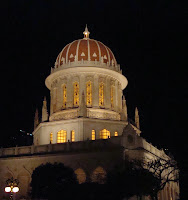 A classic full Moon came up across the bay, a shame I missed the eclipse from here...

Membership has its privileges!
I got to Haifa (9o km north of Tel Aviv) about 630pm... transferred in Chicago (9f outside of the terminal), Frankfurt was a balmy 40c outside.
Frankfurt airport was beautiful as is the one here.... Actually, the airport in Tel Aviv is spectacular...a real arrival… by the time I got thru customs got my luggage (all very fast, and I knew it was going to be tight) I had missed the last train for Haifa on Friday (shabbat - starts on Friday evening, so mass transit begins stopping around 3)... so got a sharoot! ( group taxi van)... that are driven by non-observant folks… Checked in, took a shower, put my stuff away and went for walk... (climb) needed to check in at the Baha'i visitor center before they closed... which seems just a few blocks away on the map… but it about a few thousand feet below me. Not to fear (I lived in Ouro Preto!) as this city is connected by an intricate set of streets, stairs and gardens) a little site seeing tomorrow before things start on Sunday... Checking in at the Baha'i Center gives me a visitor's badge, the best part being I can get to where I want anytime (dawn to sunset) right through the gardens themselves!
This city is a very special place, especially for members of the Baha’í Faith. Clic on the link and you can see amazing fotos of where I am by a truly talented photographer. Membership does have its privileges! Though the Carmalit metro system begins running Saturday evening.

My Hotel (Dan Panorama) is on the very top of Mt Carmel and I'm on the 18th floor (I am in the far tower on this side in the picture). Lets just say that the drop out my widow is value added.

So with the 10 hour time difference ( 4am and I am wide wide awake)… I'll post this, check more mail and try and finish the book I ma devouring Three Cups of Tea.

Shalom!
Posted by oreydc at 6:17 PM No comments: Links to this post

The mantra Om Mani Padme Hum (literally: "Aum, to the Jewel in the Lotus, hum) is recited by Tibetan Buddhists to invoke Chenrezi, the Bodhisattva of Compassion. Repeating this mantra accumulates merit and eases negative karma; meditating upon it is believed to purify the mind and body.

Posted by oreydc at 9:29 PM No comments: Links to this post

Where we are in the age timeline impacts how we perceive world events. -- Chad
Michelle Obama is 44 years old. According to Wikipedia, she turned 44 on January 17.

I am 41 (January 26 if anyone is asking).When I heard Michelle Obama's statement, it resonated with me. "For the first time in my adult lifetime, I'm really proud of my country, and not just because Barack has done well, but because I think people are hungry for change." Now I don't have a horse in the Democratic Party race. I personally have been Switzerland from the start. But I really liked what Michelle said.Older readers (defined as older than me) might remember John F. Kennedy or Lyndon Johnson signing the Civil Rights Act. But Michelle doesn't and I don't. I can relate to that.So put yourself in our situation. I do remember having my cartoons interrupted for the Watergate hearings, and I remember my parents insisting on making us watch Richard Nixon go through the back of the White House to the helicopter. But when Nixon took off in the helicopter, I was 7.The first Democratic president I remember was Jimmy Carter. I grew up in a conservative area, so I remember much Carter-bashing. My parents liked Carter, so it wasn't an issue inside the house. While Carter was the first president I really remember, this was still in my childhood.By the time Bill Clinton came along, I was 25 and Michelle was 29 during the 1992 election. There was hope after 12 miserable, deflating, depressing years of Ronald Reagan and George H.W. Bush. Everything I had learned growing up about how society had been was being dismantled and thrown out the window. So even though I thought I had hope, I never previously had hope, so I don't think I really knew what hope was. The 1992 election of Bill Clinton could qualify as a time to be proud of our country in my adult lifetime, and if Michelle is completely honest, she might admit that was true.But I can also understand if looking back on it now, pride isn't quite the word to use. Relief might be a better phrase. Finally we had a president who wouldn't do more damage to our country. But the anguish of the MSM beating up on Bill Clinton became too much to take. I am 41 and the only president in my lifetime, adult or otherwise, who did not get a honeymoon period was Bill Clinton. As Clinton gave concession after concession to the right to get them on his side, what hope there was had drained away.

Two stolen elections since then, along with further dismantling of what little we have left in society, and I'm not sure, even more than in 1992, what hope is. Bill Clinton was a centrist. Heck, even the "liberal" bastion of John F. Kennedy appointed Byron "Whizzer" White to the Supreme Court. White dissented on Miranda v. Arizona and Roe v. Wade. Hope to me is someone who be an architect for truly making a difference. If the next president is Hillary Clinton or Barack Obama, unlike Michelle Obama, I might feel relief, not hope. I would wait to see if the MSM can treat a Democratic president as well as (or even close to) a Republican president. I would wait to see if the new president can make a difference in re-establishing some semblance of the great things our society used to be before Reagan. Michelle Obama said, "because I think people are hungry for change." The people are so hungry for change, Michelle; they are starving so badly they don't remember what food tastes like. But will they really get fed -- in my adult lifetime?

Posted by oreydc at 3:06 PM No comments: Links to this post

Please watch this Video. This is well worth your time to watch!

http://video.stumbleupon.com/#p=ithct48cqw
Posted by oreydc at 11:17 AM No comments: Links to this post

Posted by oreydc at 12:19 PM No comments: Links to this post

Bananas, A Storied Fruit with an Uncertain Future

Audio for this story will be available at approx. 3:00 p.m. ET A new book by Dan Koeppel examines the stories past — and the endangered future — of the Banana. iStockphoto

Fresh Air from WHYY, February 18, 2008 · Americans consume more bananas than apples and oranges combined. Dan Koeppel, author of Banana: The Fate of the Fruit That Changed the World, gives us a primer on the expansive history — and the endangered future — of this seedless, sexless fruit.

Koeppel traces the ubiquitous yellow fruit back to the Garden of Eden, where, he argues, it, not the apple, was the "forbidden fruit" that Eve offered Adam.

In the 20th century, he examines the United Fruit Company's maneuvering in the "banana republics" of Central America, and warns that the banana's unique reproductive system — each new fruit is a genetic duplicate of the next — makes it especially susceptible to epidemics.