Posted by oreydc at 5:52 PM No comments: Links to this post

A colleague of mine invitedme to see the drumming in South side Park downtown... it was great! Thanks Rose! 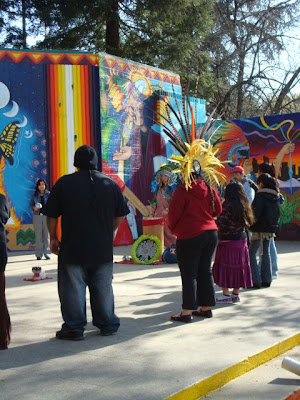 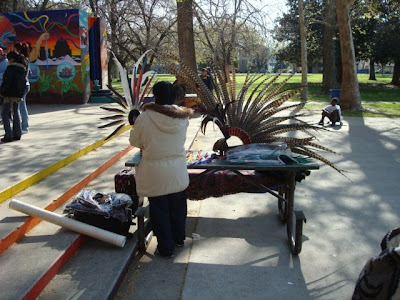 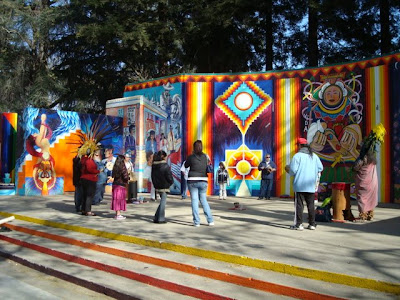 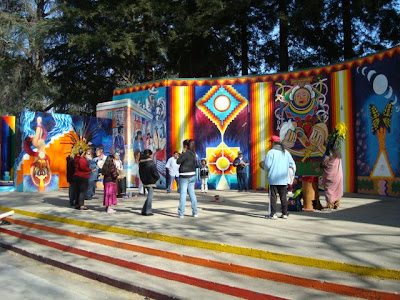 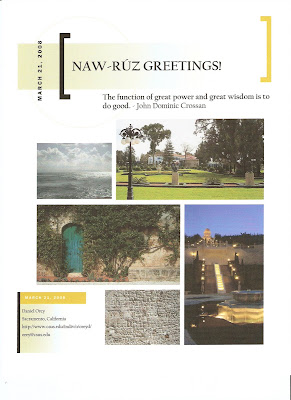 Posted by oreydc at 2:55 PM No comments: Links to this post

My frienda at Kalimat Press sent this greeting and poem. so let me share and exend my very best wishes for a happy and prosperous New Year to my deovted readership as well!

One of the poems of Tahirih that celebrates life and a time of renewal may actually have been written on Naw-Ruz. She refers to the day in the poem:

Your lover is here! Get up, and brush the cobwebs off your hair. Now your sweet love has come with love for you.Wake up, dead lover!

Your loved one is here. The doctor of mercy stands by your bed. Get up! Get up!

No more grief, no more tears! You-still cold from your long separation-will now embrace your love! That much is clear!

So or wan, so worn, and wasted by the Fall - Get up! Get up! At last the Spring is here.

It's New Year's Day. Life is calling for you. Rise up, you corpse of every dead, past year!

(trans. by Amin Banani and Anthony A. Lee, see Tahirih: A Portrait in Poetry)

Posted by oreydc at 8:42 AM No comments: Links to this post 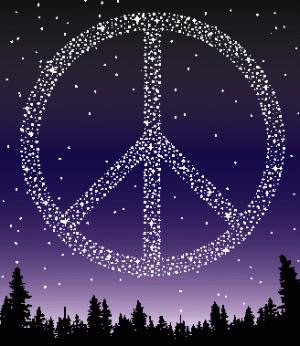 Posted by oreydc at 8:36 AM No comments: Links to this post

Alliance for the CSU

Yesterday, we had an historic meeting where the administration, trustees, students, faculty and staff pledged to work together to lobby the state to stop budget cuts to the CSU. We have created the Alliance for the CSU (www.allianceforthecsu.org) for this purpose. We are asking all faculty, staff, and students to join the Alliance for the CSU.

There are 3 ways to join the alliance.

Sign a hard copy of the card. Cards can be requested from the CFA office at 106 Brighton Hall, cfa@csus.edu.
Sign up online at www.allianceforthecsu.org.
Please forward this to anyone who may be interested in participating.Please reach out to your students, your family and your friends to ask them to speak out on behalf of the CSU. Together, we can improve the budget situation.

The Times on Obama

Mr. Obama's Profile in Courage The New York Times Editorial
Posted by oreydc at 9:09 AM No comments: Links to this post

The Bee on Obama

Editorial: Obama’s speech moved beyond mere politics
Published 12:00 am PDT Wednesday, March 19, 2008Story appeared in EDITORIALS section, Page B6
On Tuesday in Philadelphia, Barack Obama delivered the most articulate and profound speech on race in America since the Rev. Martin Luther King Jr. proclaimed, "I have a dream," in 1963.
It's too early to tell whether the speech will defuse the political firestorm that gave rise to it – the incendiary, anti-American remarks made by the Rev. Jeremiah Wright, Obama's friend and spiritual adviser. No doubt Wright's comments will continue to be amplified and distorted by talk radio demagogues, by commentators and politicians, black and white, who have built entire careers exploiting and stoking the fires of racial division.
Obama condemned Wright's words in unequivocal terms, calling them "not only wrong but divisive" and "racially charged." But he refused to abandon Wright, the man who he said "helped introduce me to my Christian faith, a man who spoke to me about our obligations to love one another, to care for the sick and lift up the poor."
Then, in a line which will be quoted endlessly in coming weeks, Obama said of his pastor, "I can no more disown him than I can disown the black community. I can no more disown him than I can my white grandmother – a woman who helped raise me, a woman who sacrificed again and again for me ... but a woman who once confessed her fear of black men who passed her on the street and who on more than one occasion has uttered racial or ethnic stereotypes that made me cringe. These people are a part of me. And they are a part of America, this country that I love."
In that one phrase Obama uttered a truth that all Americans understand. In the privacy of our homes the different tribes that make up America say unkind things about one another.
Still, it would be a mistake to dismiss this as just a speech about Wright, a masterful response to a potentially fatal challenge to Obama's presidential aspirations. Regardless of what happens in this campaign, this speech will be studied now and in the future for its nuanced picture of race in America today.
Obama refused to allow himself to be enticed into the quicksand of pettiness (and simplification) on race for an election campaign – a pit from which no one ever returns.
In a 40-minute speech, he offered Americans his take on 221 years of American history – its great promise and all of its warts. He showed the roots of both white anger and resentment and black anger and resentment – and how both are equally legitimate and equally limiting. Wright's "profound mistake," Obama said, is that he speaks "as if our society was static; as if no progress has been made."
Obama argued that our refusal for a generation or more to have a genuine conversation about race comes at a cost ("racial stalemate"), and he showed us how we could have such a conversation going forward – in a way that is in keeping with our traditions. The American experiment, he said, is about progress and ongoing struggle for a perfection that we never reach. And he made a call to action with his closing example, for all of us to "narrow that gap between the promise of our ideals and the reality of our time."
This was not a campaign speech; it was Barack Obama speaking to the ages. Clearly, he has thought about this issue for a very long time. Americans can learn from him, no matter what course the campaign may take.

In his own words

http://my.barackobama.com/hisownwords
Posted by oreydc at 2:36 PM No comments: Links to this post

"Those are my principles, and if you don't like them ... well, I have others."(Groucho Marx, actor and comedian)

"Those who can, do; those who understand, teach."(Lee S. Shulman)

"It is our responsibilities, not ourselves, that we should take seriously."(Peter Ustinov, British actor and writer)

"Personally, I am always ready to learn although I do not always likebeing taught."(Winston Churchill, British prime minister)

"The only good dissertation is a done dissertation."(Richard Stockton Higgins, Father of a Ph.D. candidate [Sent byChristine Guy Schnittka]

"Nothing strengthens authority as much as silence."(Leonardo da Vinci)

"The difficulty lies, not in the new ideas, but in escaping the old ones, which ramify, for those brought up as most of us have been,into every corner of our minds." (John Maynard Keynes, English economist)

"The best way to have a good idea is to have lots of ideas."(Linus Pauling, Nobel Prize-winning scientist)

"Whom the Gods wish to destroy, they first make mad."(Euripides)"Instruction does much, but encouragement does everything."(Johann Wolfgang von Goethe) [From a posting by Cloyd Hastings]

"Each time a person stands up for an ideal, or acts to improve thelot of others, or strikes out against injustice, s/he sends forth atiny ripple of hope, and crossing each other from a million differentcenters of energy and daring, those ripples build a current which cansweep down the mightiest walls of oppression and resistance."(Robert F. Kennedy)

"Only those who dare to fail greatly can ever achieve greatly."(Robert R. Kennedy, former U.S. attorney general and U.S. Senator)

"Arithmetic is being able to count up to twenty without taking off your shoes."(Mickey Mouse) [From the signature of Diane Roberts]

"International education exchange is the most significant currentproject designed to continue the process of humanizing mankind to the point, we would hope, that nations can learn to live in peace."(J. William Fulbright)

Posted by oreydc at 2:19 PM No comments: Links to this post

From my Sonja in the Netherlands who said:

I recently finished first experiment in 3d modelling in a game engine with a colleague, Eric Kuijl. He did the pulsating magnets + snowflakes and I did all the other stuff. The sounds you hear are sections from contemporary German composer, Heiner Goebbels' piece: Surrogate Cities. Chosen because our work was presented as part of a festival last week at the Hague Conservatory. You will be prompted to download the Unity Player when you get to the page.

This takes 20 seconds to download and you need to install it before you will see anything. It is worth the hastle :) : http://www.sonjavank.com/media/vc.htm

or as we say in Brasil "vale pena" or was say in California "way cool bitchen!"

Found this amazing link, made me have dose of the saudades (made me really miss the place):

If anyone knows the name of the song Oregon is playing let me know... its perfect!
Posted by oreydc at 12:30 PM No comments: Links to this post